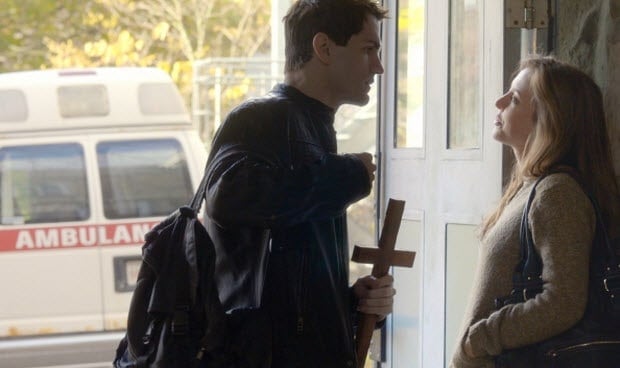 At this point reviewing Being Human should only require that I turn in keyboard smash. Or the repetitive use of exclamatory internet acronyms. With the series finale now only 3 weeks away I can’t help but wonder if this show has any intention of us getting there. The pacing, action, and emotion each week isn’t just getting better, it keeps increasing in rate and intensity. (How though? How does it do this? Is there no limit? I thought there was a limit.) While this week was a little less heavy, it remained dramatically spirited. This show truly knows just how much to push in any direction without going too far.

“Don’t You Die For Me” picks up for Aidan, Josh, and Nora exactly where “Gallows Humor” left off. Aidan and Suzanna are now in a weird relationship not relationship of maybe forgiveness. Their first move as a reunited couple is pretty telling about whether their reunion will be a success. Suzanna makes Aidan promise to help stop Kenny from growing the Boston nest. To do that, he must kill his own son. Nora is on her way out of the house, but she bumps into Josh for a moment before snagging some girl time with Sally. I’ve said this before, but there was never enough shared screentime between just these two over the years. It’s wonderful to see the show heartily making up for it this season. Meanwhile, Josh is juggling avoiding Nora with becoming the wolf pack’s new alpha.

Sally on the other hand is living in this weird limbo of alternate universe feelings and original universe action. After seeing how Josh and Nora turn out if they never fall in love, she’s extra adamant about them not splitting. As for Aidan, she spends a lot of time trying to evade him. Once the communication barrier gets broken, they end up having some pretty exciting moments together. This episode sees their romantic relationship developing, in addition showcasing how far Sally has come from the lost ghost girl we met in the series premiere.

Suzanna and Aidan spend most of the episode in a pretty intense push-pull. While it appears that Aidan has to a large (and wonderful) degree addressed his demons, Suzanna is still holding on to them – forgiveness or not. The monster morality struggle between Aidan and Suzanna could be pretty easily paralleled. They are such polar opposites when it comes to how they handle their internal dilemma though that they find themselves in a standoff over Kenny. When the moment of reckoning arrives, Aidan chooses his son – who he earlier (and interestingly) states reminds him of Bishop – before staking his wife. For as much as Suzanna wanted to be wrong about Aidan, I’m sure there were fans saying the same about her as we watched her turn to ash.

While Josh’s actions in “Gallows Humor” were absolutely cause for alarm, watching him take (healthy) responsibility for it was a giant development leap. He makes neither an excuse for himself nor tries to push Nora to come back. He doesn’t tear himself to shreds either. He is not just accepting his nature, but truly desires to control it. What makes this even more moving is that he wants to do it both for himself and Nora. Nora, on the flip side, doesn’t want leave, but she also doesn’t want to be an enabler. Nora loves him, but in order to keep loving him they have to be safe together. Without glossing over what gravity of what happened in 4.07 we see exactly why their relationship is worth saving. They make each other stronger.

To help him deal with his Nora-less reality and control his wolf, Josh takes on leading the pack this week. What they show us is that there’s a difference between accepting your darker qualities and embracing them. Locking Josh up like a caged animal to create more wolves – while Kenny is growing his nest – raises the monster battle alert level to orange (that’s one below red in case you were wondering). They also reinforce something I’ve felt pretty strongly about since the start of the series: Gaggles of monsters are super duper bad news 5eva.

Sally had some of the best action this week. She works on coming to terms with her love for Aidan in more way than one, which results in Nora spilling the feelings beans. She also does something I’ve been waiting four seasons to see. No, I’m not talking about her jumping inside the body of a large black were-man to passionately kiss Aidan. However, this was hands down one of the most weirdly hilarious and sensual moments on the show. After Sally “eating” Aidan last season, I was pretty sure we would never get a better example of Being Human‘s sense of humor. I was wrong. It happened. Last night.

In an effort to save Josh, Sally goes on a possessing spree. With Aidan. And they kick major butt. The two take on about 8 werewolves in one of the greatest fights the show has given us. There are ramifications for Sally, but as a huge fan of hers this moment was glorious. From Emily getting trapped in the basement with Josh to Aidan getting shot by papa purebred, our resident ghost has mostly been benched in spite of her fighting spirit. Not this time though. Here we see one of the greatest displays of her ghost power, proving that Sally is just as strong as the others – with or without a body.

This week did seal the deal on one small issue I’ve been having. In case you missed it, a lot’s happening in the show right now. As a result there’s less time to explore storylines in the way past seasons have. It seemed to become more obvious in “Don’t You Die for Me” with Suzanna’s death and Josh’s pack experience. It would have been nice to see Josh settle a bit more into pack life before the big plot turn. And despite Suzanna not being the greatest vampire in the world, her first death was the catalyst for Aidan losing his humanity. Watching these two things play out a bit more and a bit longer on the show would have given the developments of this episode a little more meat.

This season has been a weird emotional ride that not only induces brown paper bag worthy anxiety attacks, but strikes the fear of stroking out into my heart. Luckily I’m still here and I’m assuming you are too if you’re reading, so throw some confetti and toot your own horn. We made it through a near perfect follow up to two weeks of alternate universe Being Human.