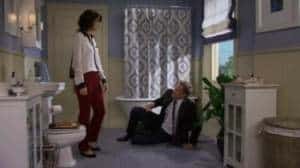 The excitement I felt when tonight’s How I Met Your Mother began with Robin telling her kids about how she told their father (Barney!) she was pregnant was palpable. So much so that I actually had to do a double take on the DVR and rewind it a few times to make sure I heard her right. I just couldn’t believe it!

Too bad that double take was for nothing as we found out by episode’s end that these ‘kids’were just a sham, a figment of Robin’s imagination. I guess it was too good to be true that the show could have that much plot development take place so nonchalantly in an episode but damn, it would have been fantastic. And it would have made this one if not the best episode of the season.

Let me first say, Cobie Smulders did an incredible job tonight portraying Robin’s range of emotions as she grapples with the possibility of being pregnant, the relief that she’s not and then the pain that she can’t ever have children. She was phenomenal for the ENTIRE episode. Her scenes with Josh Radnor over whose job it is to ‘cheer her up’were fantastic and some of the best work we’ve seen from not only her but him all season. Perhaps most importantly, these scenes made me interested and thankful for Ted as a character again which has been a long time coming.

As a card-carrying member of the Barney and Robin fan club, their fake kids really messed with my head. Why give us something so direct and so forward launching in these character’s lives just to take it away? I feel cheated…again. There has been so much ‘almost’development in their relationship this season, it’s getting kind of old. I, as I suspect many of you are, am ready for progress. Let’s get rid of Kevin (who has been a mere after thought in the past few episodes) and get the ball really rolling on these two. Or don’t and take the possibility that Robin and Barney end up together out of the equation.

I feel like Marshall on the roof being jerked around by a teenager and although this was an otherwise great episode, I’m sick of not knowing anything concrete about the future for most of our favorite gang.

So what did everyone else think? Were you just as thrown as I was by the fake out? Did you enjoy the episode? What do you hope for the future for Robin, Barney and Ted? Let us know in the comments below!