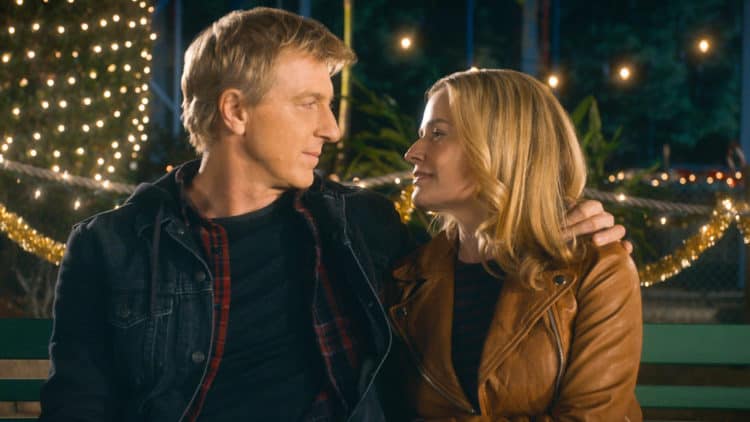 A lot of people might not realize that Elisabeth Shue is the most successful actor to come out of The Karate Kid since her career continued to build following the movie, so getting her to come back even for one episode felt as though it might have been nearly impossible for more than a simple cameo. In fact, it almost looked as though she and Johnny were going to be destined to keep their talking limited on Facebook for a little while, but when she mentioned the desire to have lunch it was obvious that our hopes were going to come true. It was kind of an ‘in your face’ moment when Daniel realized that the two of them had met earlier in the day before they came to the country club, but it fits since like it or not, Daniel has had as many downs as ups in this series so far, but the funny thing is that both Daniel and Johnny have been trying to do what they feel is right, they’ve just been going about it in different ways. Even more amusing is the fact that it took the emergence of Ali to make both men realize that they see something of themselves in the other that they really didn’t like, and that they’re more alike than they want to admit. If there was no other reason to bring her into the show, this would have been enough. But it was a director of The Boys that made Shue realize just how much she means to the fans and how badly they wanted to see her back, if only for an episode. Now maybe that will work for certain other characters.

What’s funny is that Shue’s one gripe about it is that she would have liked for Ali and Johnny to share that one kiss that they were about to engage in before she remembered that she had to attend a Christmas party with her parents. A lot of fans might have been pulling for it, but there were likely many that were still saying “Don’t do it Johnny” due to his involvement with Carmen, Miguel’s mother. That relationship is still budding after Carmen allowed Johnny back into her and her son’s life, and while the kiss might not have ruined it, there’s still enough honor left in Johnny that he admitted that Carmen was really something and that she was important to him. Even better is that Ali recognized this and made it clear that she’d enjoyed her day with Johnny, and that all was well for the most part, since she, Johnny, and Daniel, along with Amanda, had rehashed the past and made it clear that where they stood was as good as it was going to get for what it was. She even made two of the biggest enemies admit that they both carried the blame for the way things had been going, which is of course a point for Team Mills, as she said in the show. But if anyone is going, to be honest about this it couldn’t have happened any other way, since Johnny and Daniel might have been leaning gradually towards an alliance, but Ali’s presence kind of sealed it since she was the linchpin between the two of them that made things more right than they ever were.

The appearance of Kumiko, Chozen, and even Yuna went a long way towards Daniel’s development since seeing an old girlfriend, learning more about his mentor, settling things with an old enemy turned friend, and meeting up with a woman whose life he saved so long did Daniel a world of good since it healed him in a way and saved his business at the same time. But that was all for Daniel, while the final link between Daniel and Johnny was Ali, the only person that could come to both of them, that had had good and bad times with both of them, and could unite them in a way that nothing and no one else, not even their hatred of Kreese, possibly could. That’s just one reason why Ali is so important to this story, but it’s a core reason that is bound to keep the show moving into the next season in such a powerful way since now Johnny and Daniel share a common cause and are working together far better than anyone would have ever expected. If you weren’t just flat out pumped by the end of the season then you might need to go back and remember why Kreese is, at this time, both the victim of his own past and the villain of the present that needs to be put down, or at least taken out of the picture. Ali provided the balance that Johnny and Daniel needed so badly, and it feels as though season 4 of Cobra Kai is going to prove this.