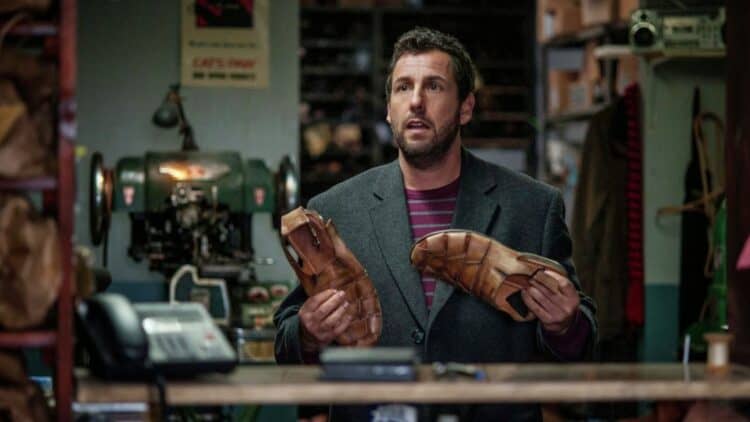 When looking up Adam Sandler movies one can easily expect that a lot of comments are going to lean toward the negative since a lot of people, for one reason or another, tend to think that his movies aren’t any good, that they’re not funny, and that they don’t carry any meaning. One could take a look at The Cobbler and think that it’s kind of a depressing story since Max Simkin, played by Sandler, is a lonely guy that lives with his mother, who he takes care of, and runs a shoe repair shop in the city. It’s not a glamorous life by any means since he opens up in the morning, does a full day’s work, then closes down and heads home to a mother whose mental health is failing and a life spent alone for the most part. The neighboring business, run by Jimmy, who’s played by Steve Buscemi, is his only real friend, and even this relationship is more or less one of convenience since Max comes across as the type of guy that’s just plodding through life one day at a time.

But that changes in a big way when a client walks through his door that’s obviously not the type that likes to be told anything other than what he wants to hear. The aggressive gangster played by Method Man leaves his shoes with Max to have them repaired, and as he’s going about the business of doing this, his stitcher conks out. All isn’t lost since Max has an old-fashioned stitcher that was his father’s, and his grandfather’s long ago. Rescuing the stitcher from its place beneath boxes in the depths of his basement, Max fixes the shoes and then waits for the individual to show up, staying past closing hours as the client doesn’t arrive. Putting yourself in someone else’s shoes is a pretty common statement, but when Max steps into the gangster’s shoes, he finds himself looking at the owner of the shoes in the mirror across the way.

Max’s fright turns to curiosity as he tries another pair of shoes, only to find that they don’t work. When he thinks about it for a moment, he realizes that the shoes he’s fixed with the stitcher have been changed somehow, and then sets to replacing the soles of many, many other shoes as he tries each pair on, becoming a different person each time. The next we see of Max, he’s perked up, he’s looking around, and he’s doing his best to guess what shoe size those around him might be, as stepping into another person’s shoes has become tempting at this time. Of course, one can imagine that Max would take things a little far as he starts living a better life than he’s been doing, as he takes full advantage of the fact that he can become anyone, and can live their life so long as he’s wearing their shoes. It’s a strange way to introduce a character such as this since Max is essentially a nobody that people look past more often than not. But when he hatches a plan to take control of his own life, things take a few twists and turns.

The gangster he impersonated to start with ends up dying accidentally, forcing Max to take on his appearance once again. Oddly enough, once a person dies, the shoes tend to reflect this, which is another thing that Max uses to his advantage. Max still ends up being caught by an enemy of the gangster, however, a man that Max allowed to live while he was playing the role. Once this situation is remedied with a violent car crash, however, Max wakes up to find himself in Jimmy’s barbershop, where Jimmy begins to reveal that he knows a little more about Max’s outings than was initially realized. When Jimmy reveals that he’s not who he was thought to be however, it’s found out that Jimmy is really Abraham Simkin, Max’s father, who he thought was dead. The long and short of it is that Abraham managed to get himself in a lot of trouble years before and felt that the only way to keep his family safe was to disappear.

When he informs Max that as a cobbler he’s a guardian of souls, the movie gets a little cheesier since it would appear that his father has kept his own collection of shoes, along with his own father’s, and has been a silent but effective savior all this time. Not only that, but apparently the cobbler life appears to grant Abraham a very comfortable living, as is revealed when he and Max ride off in a chauffer-driven limo. All in all, this movie was never bound to be a blockbuster but was a lot better than many people gave it credit for, especially considering that it does invite a lot of interesting though about tradesmen.