Home
Movies
Drama
Together: What the Film is About and Review 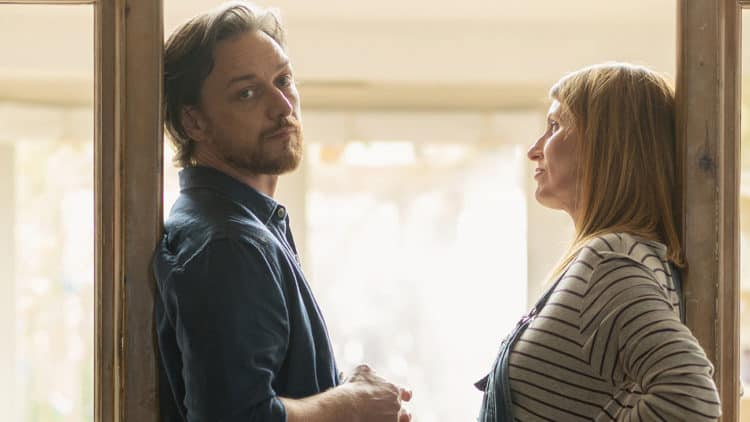 When the pandemic brought the whole world to a standstill in 2020, many people had to stay indoors. However, being cooped up at home all day for a year with family proved to be more challenging for some people. That is what the film, Together, is all about. Here is everything we know about this 2021 film that is on everyone’s lips.

Together tells the story of a married couple who are stuck at home during the COVID 19 pandemic. Like most couples that went through quarantine together, they start happy. Though after some time, the two realize they might not like each other very much. The movie stars talented actor James McAvoy as the self-employed husband who runs a boutique computing consultancy. At the same time, co-star Sharon Horgan plays his wife, who is a charity worker. James is known for his stellar acting and starring in 2008’s Wanted and 2016’s Split. Horgan is an award-winning actor best known for her role in 2006’s Pulling. The couple’s 10-year-old son is autistic and often absorbs all that goes on around him. The child is ‘Artie,’ played by Samuel Logan. A fun fact about the film is that Logan’s character was never supposed to be in it. Instead, his only mention is in the couple’s conversations. Though adding Artie to the complicated mix made the film ten times better.

Why The Talented Cast?

According to Deadline, as soon as MacAvoy heard the Dennis Kelly written film had Stephen Daldry as the director, he said his decision to join the project was a ‘no brainer.’ Sharon Horgan even added that the exquisite script is what caught her eye about the movie. The talented duo plays the married couple who can’t stand each other’s guts. Though when the pandemic comes around, they have no choice but to quarantine together. During the couple’s heated arguments in the film, one funny comment you won’t forget is ‘I hate your face!’. At its core, Together is a movie about two significantly different people coming together because of the love they share. The husband is a working-class conservative with differing ideals than his ‘old money’ wife, who is more liberal. Their arguments are real and raw that you feel every moment as you watch. It is a heartfelt story of family and love which appeals to that soft spot in your heart.

McAvoy’s and Sharon’s comedic and dramatic talents also shine throughout the short film. The British film is set sometime between 2021 and the early days of the pandemic back in February of 2020. A time when everyone was terrified about what COVID 19 meant for humanity’s future, if there was going to be one. It dissects what such a world state can do to a couple whose relationship is already hanging by a thread.  Together plays out in a beautiful suburban home in the UK. A large chunk of the movie is played out in the kitchen area, making sense since 90% of parents spend their time there.

Together’s fantastic script is by screenwriter Dennis Kelly who has won several awards for his work. The 50- year old British writer has credit on projects like The Third Day and Utfilm stars. The film stars have admitted that Dennis’ script is the main reason they came on board for the ‘pandemic’ movie. In addition, Dennis revealed to BBC UK that Together was close to his heart since he drew a lot of inspiration from his relationship. However, he quickly clarified that his connection was doing well despite where he got his inspiration. Nothing like what was going on between McAvoy’s and Sharon’s characters. Although, like most relationships during the pandemic, they also face ups and downs while being cooped in the house.

The BBC film also had Emmy-winning director Stephen Daldry who did a fantastic job bringing Dennis’ words to life. The duo talks into the camera in a monologue to break the fourth wall in a few scenes. Speaking directly to the viewers makes it seem like they are reliving their lockdown experience. This unique take can be attributed to Dennis since he wrote the script as a play. The use of monologues, however, was annoying to some critics who felt it was overused. Unlike most movies, viewers never got to know the character’s name till the end. The director only introduced them as ‘he’s and ‘she.’

One of Together’s producers, Sonia Friedman and director Stephen, convinced Dennis to adapt the script for Television audiences. The initial plan was for a theatrical release since it is what Dennis Kelly is known for writing. Together is one of the best additions to the pandemic genre movies that speak on the world’s current condition. The 87-minute film also took short of production, partly due to the COvid 19 pandemic restrictions. At the time, filming could only begin if studios followed protocol to safeguard everyone’s health, like wearing masks and social distancing. Dennis Kelly completed the Together movie script by May of 2020. Filming of the movie then took place between April and May 2021 in Kensal Rise, London.

Together was first released in the UK in June 2021 for BBC. For the US movie market, the three-character film release was in selected theaters on 27 August 2021. Due to the pandemic’s harmful effects on the Box Office, the film did not perform well. The movie distribution in the US by Bleeker Street only made $102,000 during its opening weekend. Despite the opening, Together is bound to be a cult classic movie that genuinely embodied how the lockdown felt.