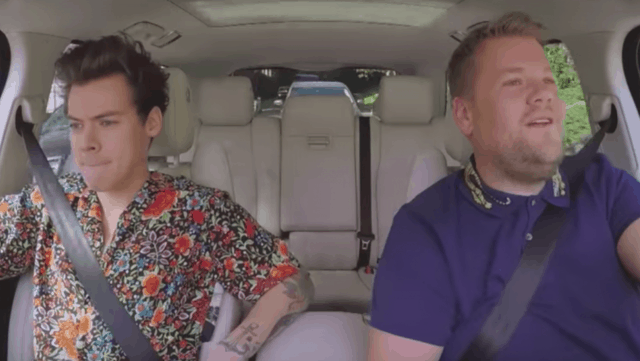 Harry Styles is having a blast during his week long residency on The Late Late show with James Corden, or at least it appears so.   The now solo singer has been showing his comedic side for this past week and he’s been doing it extremely well.   So far he’s done things like take over James Corden’s monologue as well as trying his hand at a game of “Flinch. ”  Styles even had stuff thrown on his face, a paper cutout of his face that is.

The singer rounded out his four-night residency by joining Corden on the road for “Carpool Karaoke,” over one year after appearing on the segment with One Direction back in 2015.  Styles and Corden kicked things off with the solo star’s first single “Sign of the Times,” hitting all of the high notes in harmony all while air-drumming. “I went somewhere else emotionally,” the Late Late Show host said after the song ended. “You weren’t here in the car.” Styles admitted that performing the rock ballad also gets him emotional: “It makes me cry – in a cool way.”

But things got awesome when the two traded shirts and sang the emotional ballad “Endless Love” by Lionel Richie and Diana Ross.  Check out the clip below: