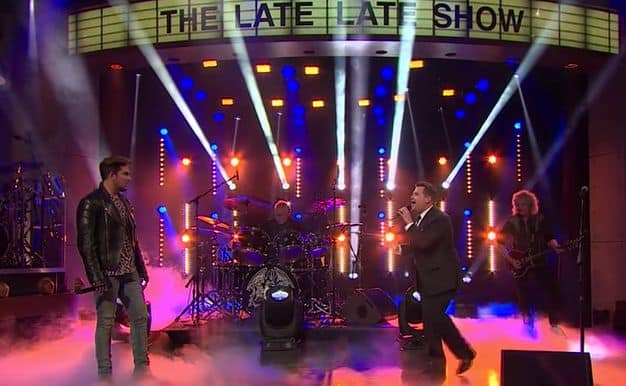 As many of you know, Adam Lambert will be touring with Queen this summer.  The American Idol alum has previously performed on stage with the band a few times prior to this year but now he’ll finally be a regular.  While no one can ever replace Freddie Mercury, Lambert has blown audiences away with his ability to sing most of Queen’s classics which include “Bohemian Rhapsody,” “We are the Champions,” and “Another one Bites the Dust.”

Lambert and Queen stopped by The Late Late Show with James Corden but the show took an unexpected turn.  When Adam Lambert catches James claiming he would be a better front man for Queen, the two settle the dispute with some help from Brian May and Roger Taylor of Queen.

As you can imagine, Corden grabs the microphone and belts out some lyrics.  Granted he’s not the singer that Adam Lambert is but you have to admit that Corden can hold his own.  His infectious personality and enthusiasm has propelled him to huge status in the last few years, all started with his Karaoke in cars with celebrities bit.

I wouldn’t be surprised if Corden took over the Late Show at some point.

Check out Corden battling Lambert below!