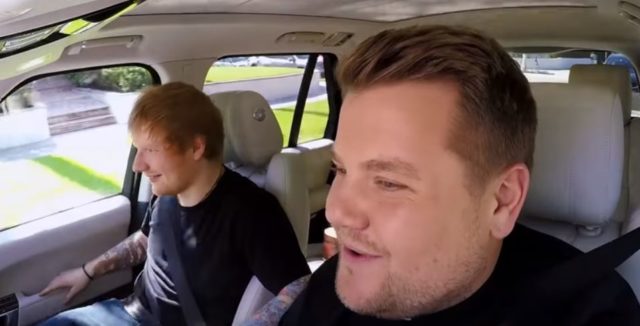 The appearance of Ed Sheeran on Carpool Karaoke has been hyped since late last week and Sheeran finally made his appearance last night on The Late Late Show with James Corden.  Of course, Sheeran didn’t disappoint.  And to add to the fun, Sheeran played acoustic guitar which was a first for the popular late night segment.

The melodic, 13-minute drive featured many of Sheeran’s biggest crowd-pleasers, including “Shape of You” and “Sing,” the latter of which allowed Corden a chance to show off during its particularly wordy bridge. What set this particular Carpool sesh apart, however, was Sheeran’s choice to turn off the radio for a stripped down version of “Thinking Out Loud.”

The carpool karaoke segment helped kick off Corden’s three day stint in London where he’ll be hosting the Late Late show from his hometown.  The segment also featured talk of two-time Carpool Karaoke passenger Justin Bieber joining Sheeran at a dive bar in Tokyo, prompting a sing-along of “Love Yourself.”

Check out the good times below: