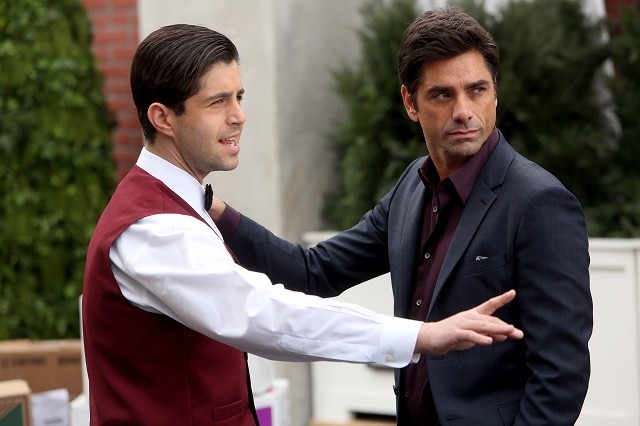 Nothing is better than when a show surprises you, and that’s exactly what Grandfathered did last night. It would have been so easy for the show to have Jimmy be a fighter, a “tough guy” that was able to beat up kids when he was younger, a dad who believed that you had to get physical in order to defend your honor. Instead, Grandfathered zigs where most shows would zag, turning Gerald’s physical confrontation with a girl’s ex into an opportunity to not only solidify his relationship with his dad but to explore Jimmy’s past as well.

If you’ve read any of my Grandfathered reviews this season, you’ll know that I’ve been clamoring for more information about Jimmy’s history. Has he always been the way he is? What was he like was younger? How was his relationship with his family, since he seemingly never speaks to them? “Gerald Fierce” gives us a little insight into what life was like for Jimmy growing up, and it’s fascinating how much it informs his character in the present.

The younger Jimmy, shown in flashbacks, was essentially told by his father that his willingness and ability to fight defined not only his masculinity but also his worth. It was never about Jimmy’s inner qualities but instead the outer force that he could demonstrate whenever he found himself up against a bully. If we look at the Jimmy that we first met in Grandfathered‘s pilot, he is taking a similar approach to his father, allowing his looks, wealth, and luxury define who he is instead of his words and actions; it isn’t the exact same thing as physical strength being the source of his masculinity but it is in the same vein, as he emphasizes the outer more than the inner. However, ever since Jimmy found out about Gerald and spent more time with him, Edie, and Sarah, there’s been a shift in how he sees the world and in what he values, and he clearly expresses that in his speech to Gerald near the end of the episode.

And really, Jimmy’s speech is what makes “Gerald Fierce” such a terrific episode of Grandfathered. The fact that he finally opens up to his son and explains that it’s not just his achievements in life but the way he lives his life that he admires most about him is a huge step forward for Jimmy and his relationship with Gerald. No longer is Jimmy solely valuing people and things on their appearance; he’s becoming a more complete person, and he’s not just registering this change internally but expressing it outwardly.

Is everything else in this episode as strong as the Jimmy/Gerald story? No, but it’s still striving to be something more, which I appreciate. For example, Sarah and Vanessa’s storyline, as well-intentioned as it is, still doesn’t feel earned, because Grandfathered has never shown us this hard-working, job-juggling version of Vanessa before. We’ve seen her strength and her feistiness  come out on occasion, and this first look into her home life is a nice start at making her a fuller, richer character. Still though, I’m not sure if it’s quite enough yet for Sarah to have the realization that she does at the end of “Gerald Fierce,” where she not only registers the hectic nature of Vanessa’s life but also sees a younger version of herself in her. I still do appreciate the fact that Grandfathered is attempting to add more depth to Vanessa’s character, though.

“Gerald Fierce” is one of Grandfathered‘s most ambitious episodes yet, and it’s also one of its most successful installments. There’s a lot about this episode that works incredibly well, and even the stuff that falls a little short is still admirable as it’s clear that the writers were trying to do something more than just produce an average, by-the-numbers sitcom story.

Jimmy’s history with his own father is revealed in another strong episode of Grandfathered.