Home
Television
Girls
Girls: They All Speak, They Don’t Talk 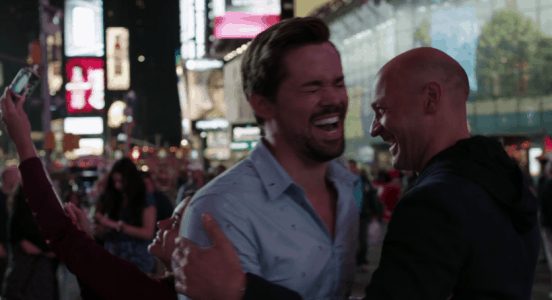 “Old Loves” opens with yet another argument between Fran and Hannah, who clash regarding their opposing ideas regarding teaching. In direct contrast with last week’s episode, when Hannah invaded Fran’s privacy by taking his phone, this time, it was Fran who, without asking permission, decided to correct grammar mistakes on the papers of Hannah’s students. The role reversal was interesting, yet annoying, and ended up with a  casualty in the form of a ripped paper.

In the meantime, Marnie comes home to angry neighbors and a new wall built into her studio apartment. Naturally, she flips and lashes out on her new husband, who, probably for the first and only time since we have met him, is on the right. Desi was actually trying to do something nice for Marnie, however, she took his actions as a selfish act. Let’s face it, this marriage is doomed, it was born dead, yet, Desi was trying to work with what he had, and the idea of a wall, is not such a bad one considering how small the apartment is.

Cut to another duo. Adam infiltrates in Jessa’s women group, which is both, creepy and cute. Since she has been dodging him, Hannah’s ex had to get creative. Once again, Jessa states that they can never be together because of Hannah, but Adam just calls her a coward and points out that Hannah would absolutely give the relationship a shot if roles were reversed.

With all the pairings a little dinged, the three girls end up at Jessa’s place, where Marnie admits she is hiding from Desi, while at the same time, advises Hannah not to let things go south with Fran, who is a good guy. As she rants about how hard it is to start a new relationship and sanctions “people who work on things, stay together”, she comes to the realization that Desi is not the problem, she is. This time, she is right and she puts her money where her mouth is at by fixing things with the hubby. This would be great if we could actually stomach the guy.

Hannah and Jessa go out for a treat, and things go awry fast. Just like she did when she met her in laws, way back when she was a married woman, Jessa decided that if she was going to go down, she was going to go down in flames. As a result, instead of plainly hurting Hannah’s feeling by telling her that she has feelings for Adam, she was just cruel and pushed Hannah away without rhyme or reason. Naturally, Hannah doesn’t comprehend what is going on and is devastated. Their interaction was the hardest scene to watch in the entire episode.

With Hannah not being an obstacle, Jessa and Adam finally get together but their encounter is awkward. Their chemistry does not translate. The future looks absolutely grim for them, which is disappointing, at best. This was the couple of underdogs that I wanted to succeed.

Unharmed by the love curse that seems to have been floating around everyone else, Elijah goes out with Dill, who also introduces him to his friends. This is the only couple that doesn’t seem to be destined to head to splitsville in the near future.

The installment obviously centers on relationships, but mostly, it digs into the key role that communication plays into them. From Desi misreading Marnie’s “I want more space” and her misinterpreting his intentions, to the neighbors complaining about the couple not being diligent enough to let them know about the construction, to Fran and Hannah’s inability to sit down and agree to disagree on how to teach, to Jessa choosing to be mean instead of open, to Jessam failing to express themselves physically, everyone except for Elijah and Dill showcased a clear shared problem. Both, the things said and all the words that remained veiled, are coming to bite them. And it’s not gonna be pretty.

Old couples showcased how volatile relationships can become, seemingly overnight, when in fact, in every case, the inevitable cracks are getting deeper and more visible. Hard to witness, tough to accept, but necessary. Now the question remains, who is going to work together and who is going to crash and burn?

Hannah and Fran disagree about their respective teaching methods. Marnie fumes over Desi’s decision to launch a major construction project in their studio. Jessa pushes Hannah away over an awkward rice-pudding meetup. Elijah gets closer with Dill Harcourt.