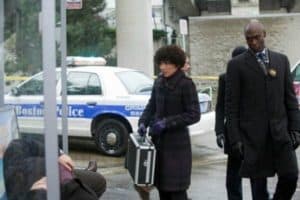 This week’s episode of Fringe, ‘Making Angels’, was certainly a long time coming: we finally, finally learn more about Astrid beyond the fact that she’s a junior field agent who’s remarkably good at handling Walter. It sometimes boggles my mind that we’ve gone so long without learning anything personal about one of the main characters on Fringe. It also felt like the other characters were learning new information about their coworker just as we were: maybe it was just me, but both Walter and Olivia seemed surprised to learn that Astrid’s mother died when she was a girl.

Jasika Nicole, who plays Agents Astrid Farnsworth, did an absolutely fantastic job in tonight’s episode. It was wonderful to see her get to take the lead, and seeing the two versions of her characters side by side makes it even more apparent how very different the Alternate is from the Astrid we’ve gotten to know. Yet again it brings up the debate of nature versus nurture, in this case in terms of autism spectrum disorders. It fascinates me to wonder how genetically identical people can be so radically different, and I love that Fringe provides such an interesting platform for the debate: they’ve certainly woven the two universes together in an entirely new way this season, and I hope they continue to do so.

I wrote an article a couple weeks ago about a set interview with Jasika during which she discussed wanting to see her two characters interact, and what their reactions might be. Astrid reacted in much the way Jasika thought she might: Astrid has, in many ways, always been the heart of the team, and she reacts with her characteristic empathy to her Alternate. She provides a stable counterpoint for Walter, and, as AltAstrid observes, Astrid functions as his voice to the rest of the world. AltAstrid actually reminded me in many ways of Walter, particularly the version in this new timeline, and I think that’s part of the reason she actually seemed to fit in the lab with the strange little family they’ve created. 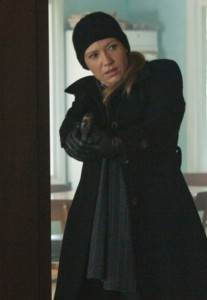 Once again I was left to wonder at how exactly Olivia’s kidnapping and subsequent replacement with AltLivia played out without Peter around. It seems that this time around, Walter feels much more betrayed personally, and I assume this has something to do with the fact that he and Olivia share a much closer relationship. As AltAstrid points out, anger rarely flares up without an emotional involvement, and I imagine that Walter feels guilty for that too: both that he actually likes Olivia’s Alternate, and that (presumably) he didn’t realize that she wasn’t his Olivia. Like father like son. And it was as intriguing as always to see the two Olivia’s interacting without the Peter issue between them: they certainly seem less at ease than the two Astrids, but I think it’s because they make one another uncomfortable for a variety of reasons.

Other than the addition of Astrid to the field, this new timeline has really begun to feel a lot more like the universe and characters that we’ve known from the beginning, although the differences that do remain are admittedly glaring. It was sad to see Walter feeling so threatened by Peter’s proficiency in the field, and his ability to anticipate Walter’s requests, when that was part of what made them such an effective team before. I do get where Walter is coming from, though: he must be thinking that with Peter around and able to do ‘his’jobs, he’s no longer necessary. And if Olivia no longer needs him, he could find himself being returned to St. Claire’s. I also found it interesting to see Olivia beginning to trust Peter as a partner, as that was how the foundations of their relationship were built.

As this timeline begins to look more like the one with which we’re familiar, I continue to find myself torn. On the one hand, I want ‘our’characters back, and I want Peter to be able to return to the people he loves. Yet at the same time, I’ve gotten invested in this new timeline as well, and I’d be frustrated if we’ve spent so much time with them only to discard them if Peter were to return to his world. I suppose some combination would be the most ideal: a way to get ‘our’people back, without having to completely abandon the new timeline. I wonder if a bleed-through effect might be the reason the Observers were so intent on erasing Peter completely. If his presence could undo the rewriting of the timeline in some way, then the Observers would have failed in correcting September’s error. It would also explain why Walter and Olivia had the connection to Peter even though they’d supposedly never known him. 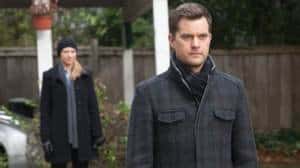 Aside from the focus on Astrid, one of my favourite parts of the new Fringe episode was that we’re starting to learn even more about the Observers: for one, they’re not as omniscient as they sometimes appear to be, and they certainly don’t have a united front. December seems to be the leader, and September apparently disobeyed him by not erasing Peter from the timeline. Evidently, disobedience of any kind is rare among whatever they are since December and the other Observers didn’t check to see that September had done as instructed. I do wonder, though, how they didn’t know before this case that Peter was still alive, and whether this means that they will again take action to try and erase him from existence — if they even can.

My only real complaint about ‘Making Angels’was how they approached the topic of spinal cord injuries. It is a very personal subject for me, and it bothers me immensely when the main message is that life is no longer worth living. That being said, I appreciate that they didn’t shy away from the sobering reality of what life is like for some people with spinal cord injuries: many fall through the cracks of a broken system, and those without family often face an even bleaker future.

All in all, I thoroughly enjoyed the episode: the moments of levity were as welcome as always, and I love the way the writers make use of two universes. I hope that we’ll continue to see the two sides working together, learn more about the Observers, and get more Astrid backstory before another 4 years goes by! A-