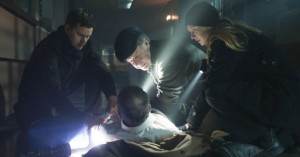 Fringe has finally started answering questions, and that couldn’t have come soon enough. Season 4 has featured some absolutely fantastic episodes, but it’s also suffered from the affliction of being too damn frustrating. Episodes like “Enemy of My Enemy,” which push the story forward, are too often followed by meandering affairs such as “Forced Perspective,” which largely ignore the momentum created by the previous episode. There’s a pervading feeling of ‘Who cares?’ throughout those episodes, and perhaps for good reason. Fringe has spent several episodes subtly trying to convince us that Peter needs to ‘return home,’ challenging the previously held notion that he is home and just needs to be remembered. The characters became just shadows of their previous incarnations that we were doomed to leave, and the mysteries, despite being quite often good, no longer held any real weight.

Thankfully, “Welcome to Westfield” finally slapped all those storylines back into place with a resounding, “Yes, it matters.” It appears that, as we had previously thought, Peter does just need to be remembered. And, of course, Olivia is the first one to do so.

She remembers Peter over the course of the episode’s case, a Fringe event reminiscent of season two episodes “Johari Window” (because of the hostile small-town setting) and “Jacksonville” (because of the melding universes). In a smart move, Fringe turned those similarities into a plot point, with Olivia remembering the case from “Johari Window” despite the fact that she never worked on such a case in the Peter-less universe. Add that to her Peter-lovin’ dream from the beginning of the episode, and you’ve got a recipe for a kick-ass cliffhanger.

But first, the case itself, which was apparently the work of David Robert Jones, a notably absent figure who pulled the strings of the episode without even making an appearance. For reasons unknown, Jones decided to meld the town of Westfield together, ultimately succeeding in destroying it nearly entirely, save for a bike shop in which our heroes managed to hide.

The episode managed to make the most of the season’s significantly lower budget. The mostly subtle changes to Westfield’s residents were surprisingly effective, and served to be the perfect example of how the show can save money without looking like it’s saving money.

So, finally, we reach the end of the episode, which saw Olivia apparently completely transformed into the Olivia we knew. The fact that she’s acting like this is a routine seems to indicate that she has no memory of Peter’s disappearance and return, which will make the next episode interesting, to say the least. It seems likely that Olivia’s memory was returned by the Cortexiphan doses that she’s been receiving from Nina, but does Nina know that is what the Cortexiphan is doing?

In any case, it seems clear that Fringe is no longer about ‘going home,’ but about remembering, meaning that the show can be compelling again after a few episodes of spinning its wheels. Welcome back, Fringe. We’ve missed you. A