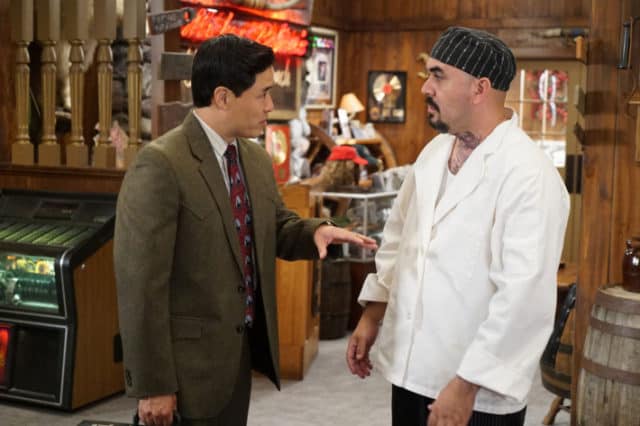 It’s a mash up of Fresh Off the Boat and classic game show Wheel of Fortune in the season premiere that aired on Tuesday. The beloved immigrant family is back for another season with B as in Best Friends, and they’re back to deal with the life of trying to live the American Dream–they’re still actually homeless. The season kicks off with the characters’ usual perfect comedic timing and marvelous plot lines as well. We’ve listed the top 5 moments from the premiere here, so enjoy but be wary of spoilers.

When Jessica Found Out the News

After giving up the family trip, Jessica is ecstatic upon receiving a letter that tells her she’s going to be in the show, Wheel of Fortune. There’s obviously no words to explain the joy this brings, but excessive screaming will do the job. Jessica exchanges screams of excitement with her mom, and the result is hilarious and completely spot on.

The Huang family ends up moving to Honey’s house and basically taking over. Honey doesn’t foresee how this can happen so quickly, but it does, and she is just a tad bit petrified. Mr. Huang blow-dries his hair for 45 minutes. Eddie eats all the cereal. Emery praises the doorjambs, and Evan criticizes her book collection. Meanwhile, Grandma Huang rates Hotel Honey a meek three stars.

Bolton has proven to be excellent on the show, and one of his best scenes here is when he’s talking to Mr. Huang about the restaurant, and how Kenny Rogers knows about it. They go into further dialogue when all of a sudden, Bolton belts out one of his most famous renditions, “Lean on me.” The restaurant customers then give him a random round of applause as he takes his bows appreciatively.

While Evan read The Iliad and the Odyssey, he hears someone or something call his name. “Read us, Evan. We’re light and fun. Read us. You know you want to.” Turns out, he’s hallucinating The Babysitter’s Club to be calling his name. But just before he could reach out to touch the books, his train of thought is interrupted by Honey and Jessica walking into the room.

Jessica gives Honey the bomb that they’re not moving out anymore right before the show starts. Jessica shines on the show but it’s clear that Honey is not feeling it at all. Honey is done with the pressure and shouts that she is done. She then explains how Jessica has taken advantage of her and her home. Honey says that she’s southern, and that it’s common knowledge that southern are nice liars. The two blow up against each other right in the middle of the show, but then they also get into a heartfelt dialogue and make up right after. Jessica says that Honey is not her best friend, but rather, she is her family. Family don’t need to say thank you because it’s a given. They hug it out, and before we know it, the Huangs are moving out.