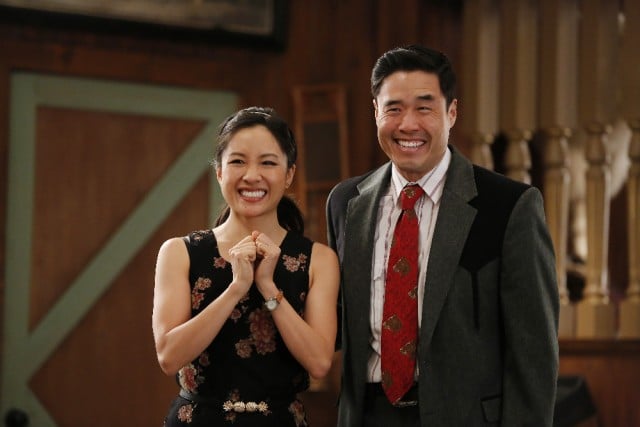 It didn’t take long for Fresh Off the Boat to sell me on “The Real Santa”; the opening scene, where Jessica describes her “Jessicatown” holiday decorations she’s setting up, is as perfect an opening scene as Fresh has had in its two seasons. And to the comedy’s credit, it weaves her little plastic-and-cotton creation into the visual fabric of the episode, using the little fake buildings and people as establishing shots for each location, not only serving as a fantastic narrative device, but a metaphorical one as well. After all, this episode centers around Jessica trying to create an entire fictional world for the Santa she wants Evan to believe in, which gives credence to the dedication to detail she places in the worlds she creates for herself.

I love how “The Real Santa” approaches the typical ‘Santa isn’t real’ story comedies with child actors do: it focuses on Jessica’s attempts to give Santa meaning in Evan’s life, rather than just find goofy ways to push the traditional lies parents tell their children (because let’s be very honest here: parents are lying to their children under the guise of kitschy tradition). Sure, her methods themselves may be goofy, but Jessica is attacking the Santa problem with specificity most comedies don’t. She’s trying to make Santa a useful, inspiring mythical figure, rather than just some implausible white guy who feeds American consumerism. She wants Evan to think he’s a scientist and effective management leader – and most importantly, she wants Evan to think Santa is someone from her culture, offering an interesting twist on the many conflicts that arise for non-white American families at the holidays, even those that align themselves with the Christian beliefs of Christmas.

But Fresh Off the Boat doesn’t just make this a “white man” issue: by focusing on Jessica’s personal conflicts with Santa, the debate is more informed by her personality than any broad critique of the holiday itself. Rather, Fresh‘s attention is focused on what Santa means to the Huang family, and the challenges that would naturally arise from that. It’s an important distinction, one that allows Fresh‘s larger cultural criticisms to feel organic to the story, rather than a preachy, accusatory moment thrown into the story to make it a Very Special Episode About Race. Fresh Off the Boat can certainly do that when it wants to – but it’s decision to make that conflict arise in character-specific ways here make it a much more enjoyable, balanced holiday episode (plus, aren’t holiday episodes supposed to be fun anyway?).

With so much attention centered on Jessica and her attempts to give Evan a worthy Christmas figure to admire, thee secondary plot of “The Real Santa” predictably feels light as a feather. Eddie throws Emery into a panic over Christmas gifts, and fools him into writing Tupac lyrics in calligraphy as a gift, but eventually Emery learns that Eddie’s laissez-faire approach to life has some value, especially during the stress-filled holidays. Of course, as adults, we know that the whole ‘live easy and things will work out’ isn’t really a fix-all band aid for anything in life – but as a story that presents Eddie and Emery’s approaches to life as equally useful, I don’t really have a problem with how predictable Eddie’s point of view is – plus isn’t it all worth it, just for the scene where Grandma is watching the “Dear Mama” video?

With “The Real Santa,” Fresh Off the Boat certainly isn’t ending 2015 on a particularly impressive and/or flashy note, the moving scene with Lao Ban Santa aside (that was really adorable; their knowing glances after they hugged was beautiful). However, where most sitcoms rely on hackneyed approaches to familiar stories, Fresh remained as consistent as ever, tackling predictable family stories from unique angles, both culturally and emotionally. It’s no surprise Fresh Off the Boat‘s become television’s best family comedy, and “The Real Santa” is a perfect example of why.