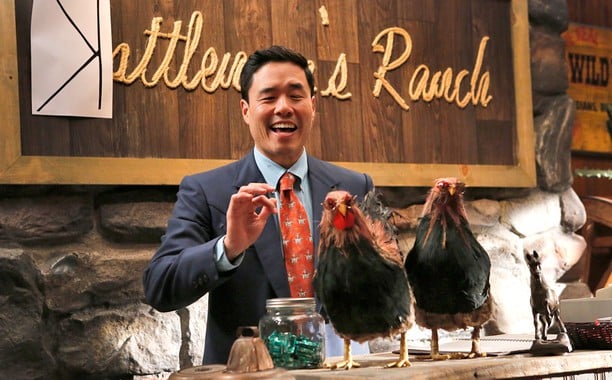 The 90’s references are in full swing from the word go on “Phil’s Phaves”, which opens  with a shot of a Gateway 2000 box (I remember how excited my family was to get our first Gateway in 1997, after graduating from WebTV) and doesn’t slow down from there. “Phil’s Phaves” is a Fresh Off the Boat episode about rudimentary web site design, middle school cassette mixtapes, and the fears of the American public about the growing influence of the “internet” – its unabashedly the most reference-heavy episode of the season, and shines as it funnels the Huang characters through the many goofy 90’s trends and mindsets it works through in this episode.

The biggest pleasure of “Phil’s Phaves” is the return to telling stories about Eddie and his friends; while Phillip Goldstein and Allison aren’t exactly the most exciting tertiary characters on the show, their presence allows Fresh Off the Boat to enjoy itself with some juvenile humor, mixing the adorable with the awkward as Eddie tries to fight off the advances of another girl at school, while finally figuring out how to express his feelings about Allison through the art of Mixtape Creation. Forget how adorable and relatable Eddie’s story is; how Fresh splits this episode between Eddie’s story and that of his parents is fascinating alone how well it works together.

It works so well because it brings Louis and Jessica down to Phil’s maturity level, swiftly executing the simple task of making them as immature as him, but in a more endearing, confused nature. Their inability to understand the Internet and its influence throughout the episode is a riot, a perfect opportunity to show Louis as his most confused (and in turn, Jessica at her angriest), furthering the lighthearted, almost satirical story about Eddie’s parents “compu-teasing” Phil with an undercurrent of slapstick humor. I wasn’t big on Phil’s presence the first time around, but his return (in Grandma’s absence, I might add) brings a different dynamic to the table, challenging the Huang patriarchs – and forcing them to nearly unravel, to the tune of 100 hours of community service – and establishing not only himself, but the entire Goldstein family as neighborhood antagonists for the Huangs, opening a world of potential for future clashes between the two families.

“Phil’s Phaves” is a kind of a pleasant surprise: though its one of the more weightless episodes of the season, “Phil’s Phaves” does a lot of subtle work with Eddie, a character whose been reduced a bit in season two, as the show shifts its focus from his point of view to that of his entire family. Eddie’s desperate lack of confidence around girls is typical for his age, but Fresh is not so quick to forgive him because of his age bracket. I like how Fresh continues to find ways to challenge Eddie’s character as he navigates the world of middle school, and expressing his feelings to a really cute girl is a fantastic way to do that, tapping into the very core of who Eddie is (he’s so lazy he doesn’t want to have to talk on the phone; “besides, I’m 80% body expression!”) to unearth this endearing story of him trying to make a dope mixtape for the girl he likes (and nearly ruining it by accidentally giving it to the girl he hates, then trying to cover it up).

There isn’t anything particularly impressive or world-changing about “Phil’s Phaves”; but with the many new/one-off stories they’ve had this season, it was nice to see Fresh get back to the basics of its first season, and begin looking inward again at the constituents of the Huang family. That re-balancing could really be what Fresh needs to fully unlock its potential this season; “Phil’s Phaves”, with its return of great recurring characters (Mitch and Nicole return!) and re-focus on the smaller, simpler stories Fresh is so great at telling, it certainly appears Fresh is gaining momentum as it heads into the second half of its sophomore season.

Fresh Off the Boat kicks its pop culture references into high gear in a terrific ‘throwback’ episode.