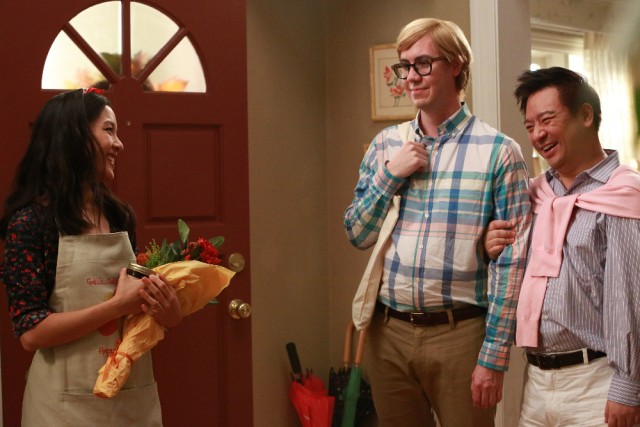 Holiday Episode Season is fully upon us, which means a lot of comedies will be telling similar stories over the next month: meals getting screwed up, ancillary family members bringing “big news” to the dinner table, and, of course, guest stars, all three of which this week’s Fresh Off the Boat features in spades. However, for a fairly traditional episode of Thanksgiving TV, “Huangsgiving” utilizes its setting and cast to inject just enough pathos into the story to keep it moving, and elevate it above the many forgettable holiday entries we’re bound to watch on sitcoms this year.

The big triumph of “Huangsgiving” is how it re-integrates Connie’s family into the mix: we haven’t seen Jessica’s sister or her family since Season 1’s “Success Perm,” when Fresh was still figuring itself out. That’s no longer a problem, of course, and this week’s episode shows it, building on the dynamics established last season, with a few small twists (and no, I’m not talking about Justin’s new love of ska). Connie and Steve’s marriage is on the rocks thanks to Steve’s failing business and Connie’s unhappiness, which brings a bit of conflict to the episode beyond “Louis and Jessica struggle to make dinner,” which is fine comedically, but obviously doesn’t offer any cathartic material, which is really what holiday episodes are all about.

And that conflict is a pretty disheartening one: Steve and Connie’s marriage is sad and bitter, their regrets leaking out over games of Monopoly and ukulele solos throughout the day, with Connie telling Jessica her husband is an annoying failure, and Steve expressing the embarrassment and emotional neglect he feels after disappointing his wife. Compared to Jessica getting mad at Louis for screwing up her cooking plans, the Connie/Steve debacle feels pulled out of another, darker world; it’s got a bitterness Fresh Off the Boat normally doesn’t have, even in the earlier, more challenging Huang family debacles from Season 1. If there’s one mistake this episode makes, it’s making Connie and Steve’s unhappiness such a central part of the humor. Ultimately, this story is about the sisterly bond Connie and Jessica still have despite their constant competition for their mother’s affection, with Steve’s sad sack character only receiving a half-baked redemptive arc when the episode is all but over.

It’s not that Connie and Steve’s presence isn’t full of humor, but in an episode with so many other hilarious and/or engaging stories, it’s surprising to see the most meaningful moment of “Huangsgiving” happen in a grocery store with a turkey fryer, the two sisters isolated from the rest of the family and holiday noise this episode offers. The moment they share is a touching one, reinforcing the familial bonds holidays rely on, but it feels like it comes in the shallow end of “Huangsgiving,” which has such evocative scenes like Jessica’s ex Oscar (who is openly gay) having a wonderful conversation with Jessica’s mother, subverting the homophobic trope every old and/or Asian character seems to exhibit on national television.

Those quietly progressive moments offer a bit of nuance to the chaotic Huang holiday, something Louis getting hit with a football and Evan/Emery setting the table doesn’t quite offer. Connie’s story tries to have this empathetic vein running through it, but it never quite goes beyond “Steve is a dork and a failure” into something truly resonant for their relationship. Instead, “Huangsgiving” wants to return to the lighter moments, watching everyone play Monopoly or Louis failing at Charades again, and thankfully, the episode is more than funny enough to make up that gap.

Ultimately, “Huangsgiving” may not be a memorable episode – or even Fresh Off the Boat‘s best holiday episode to date, existing in the shadow of “Miracle on Dead Street” – but its depiction of family conflict (both dealing with it, and trying to hide it) rings true, even in the hyper-comedic reality Fresh Off the Boat lives in. It’s hard to build a memorable, emotionally resonant half hour from characters we see once a year, but “Huangsgiving” makes a pretty good attempt, delivering a hilarious, if slightly weightless, episode in the process.