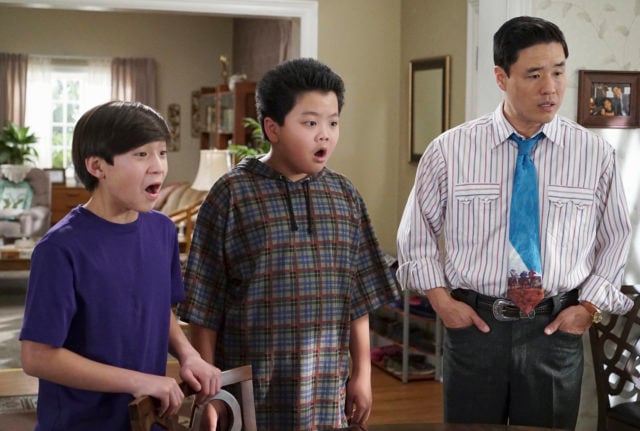 Season three of Fresh Off the Boat is filled with special moments. We’ve seen the Huang family deal with the success that they’ve achieved and seen them assimilate into a new culture while managing to preserve their own cultural heritage. Thematically, viewers are watching the pursuit of the American Dream in action. The family as a whole are on the shelf just beneath the pinnacle of success and this excitement keeps viewers looking forward to the next episode to see what will happen.

Here are the top five Fresh off the Boat moments for season 3.

1. Louis and Jessica Relate to Ghost

The discussion centers around Louis’ desire to move back to Taiwan. He knows that he can achieve even greater success in the country than he has in America. Jessica points out the benefits of staying in America. She loves the life that she now enjoys. She shares that she loves bagels and she didn’t think she would ever like them. The two discuss the pros and cons of staying or going and end up comparing the dilemma to the movie Ghost with Patrick Swayze.

2. The Story of Gene and Margaret

Gene tells everyone at the dinner party that he wants to show the story about he met and romanced Margaret. She tries desparately to stop him from starting the flick. He plays a video of a romantic scene that the couple made titled “Ghost 2.” As the movie starts Gene is horrified. He didn’t realize that this is what he had loaded in the player. In the video each had died and became ghosts. It is a short clip that is the recreation of the Patrick Swayze and Demi Moore movie. At the end of the presentation, there is not a dry eye in the house.

3. Was I Excited About the Move?

Louis and Jessica talk about the upcoming move to Orlando with the children. Jessica explains in a polite voice why they are moving. The ire is clear as she talks about leaving Chinatown and everything that they know and love as well as everything that is familiar. All of this she goes on is in exchange for a new home in Orlando where they are not familiar with anything nor do they know anyone. It is one of the most polite exchanges of a couple who are obviously fighting but trying to conceal it through the use of good manners and self restraint.

Any busy mother and housewife can appreciate this moment in Fresh off The Boat. Jessica fakes being sick. She quickly learns how much fun she can have with the extra time. She rests, reads magazines and has a great time until she gets caught that is.

Louis describes what is called the Asian Flush. It is an allergic reaction to alcohol. When Eddie drinks alcohol he begins to break out in a terrible rash. The clip includes Louis’ recollection of his first encounter with the condition. It’s a hilarious must watch.