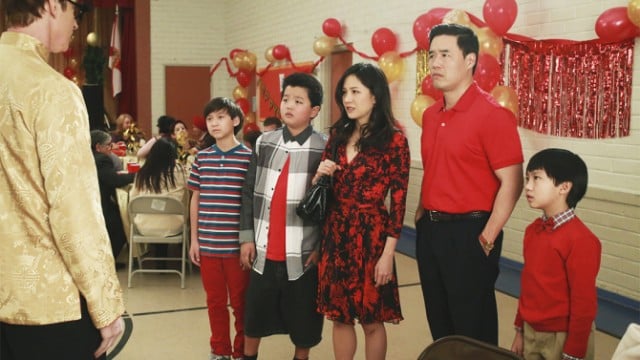 Those expecting Fresh Off the Boat to return from its two-month hiatus with a splashy episode might find themselves surprised by “Year of the Rat”. Despite being the first television episode about Chinese New Year (at least, the first I’ve seen in my lifetime), “Year of the Rat” is a fairly muted episode of Fresh, content to fall back into the regular rhythms of the show while filling in the margins with cultural reflections on the holiday. And although there’s nothing really standout about the show’s humor or plot (which centers on Louis being an idiot again), “Year of the Rat” and its unassuming approach to celebrating a holiday most Americans forget in favor of President’s Day is somewhat charming, never forcing its agenda into the episode or becoming preachy on the subject.

It doesn’t necessarily make “Year of the Rat” a great episode of the show; but its importance can’t be understated, in how effortlessly it integrates the holiday into the Huang family dynamics, and finds meaning in their journey to feel at home in Orlando. After Louis screws up the day of their flight back to D.C. (which is the one part of the episode I find totally ludicrous: when would Jessica ever trust Louis?!), the Huang family find themselves stranded in the suburbs of Orlando, not exactly a hot spot for Chinese culture in the mid-1990’s – unless you want some horribly inaccurate Chinese imagery tattooed on your forearm, of course.

What transpires is typical Fresh off the Boat; realizing his mistakes, Louis surprises Jessica with a Chinese New Year party at the restaurant, an event that allows the show to drop a whole lot of education about the holiday – and express just how frustrating that is to have to do, with an audience full of people that are going to have a ton of questions about what in the hell is going on. For the most part, Fresh handles this task with grace; and although at times it slows down the show’s rapid comedic pace, it’s able to both educate and entertain without feeling like its tipping its hand too far towards the former.

I do wish there was a little more on the fringes of the Three E’s and Grandma plot, which focused on the red envelopes containing money Chinese family members often exchange during the holiday. There’s gold to be mined from Evan’s failed snow cone business, Eddie’s dunking fantasies (and hair dreams; that Flowbee is frightening), and Emery’s attempts to acquire a fedora; but outside of a couple Grandma punchlines, it doesn’t feel like “Year of the Rat” is as invested in the stories with the Huang children as it is the parents. This isn’t a huge mark on the episode obviously, but when Grandma suddenly decides to give them all money in the end, it doesn’t feel as if those three mini-stories reached their potential at any point.

More importantly, though, “Year of the Rat” finds its place integrating the show’s core journey – that is, an Asian-American family trying to establish themselves in a world that barely understands them (or even want to) – in with the rich cultural traditions it wants to celebrate. And given its presence as the only Chinese New Year episode of note in television history (at least, those focused on the familial celebrations of the holiday, and the underlying meaning of its imagery and design), it would be easy for Fresh Off the Boat to fall victim to its position as an Important episode in the show’s history. It doesn’t, however, and it makes for is a solid episode with a particularly strong cultural undercurrent – it may not be the most flashy, hilarious episode of the show, but it understands both the importance of its message, and how essential it is to make it just feel natural, like any other episode of the show. After all, shouldn’t any show be able to deliver an episode about a specific cultural holiday without having to feel like its a Big Deal, or different than any other normal Christmas or New Year’s Eve episode? Despite its high-profile status, Fresh remains down to earth in “Year of the Rat”, perhaps its most impressive feat of the season.

Fresh Off the Boat Season 2 Episode 11 Review: "Year of the Rat"

Fresh Off the Boat returns with an endearing episode about the Chinese New Year.