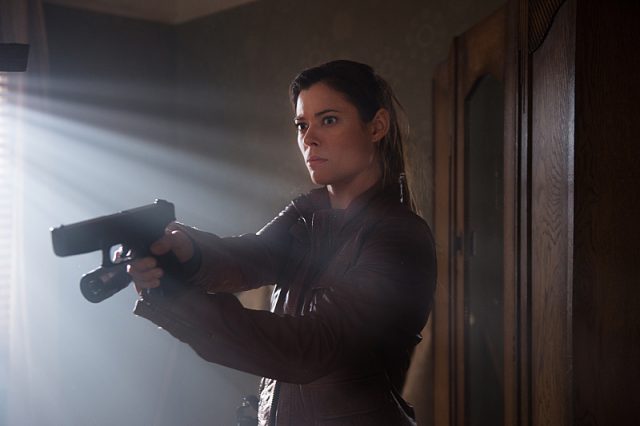 After nine episodes of investigating, Raimy and Frank finally discover the Nightingale Killer’s true identity in this week’s Frequency. Even though I said last week that I didn’t think the killer would be Deacon Joe, simply because I felt the show would want to leave us hanging until the penultimate episode of Season 1 to reveal who the serial murderer was, it turns out that the seemingly kind-hearted, religious figure is the man behind all of these brutal killings, and I’m more than satisfied with that answer.

As I’ve mentioned before in these reviews, the serial killer storyline is not the major draw to Frequency for me; of course, I want to see Raimy and Frank rescue Julie from the Nightingale, but their connection with each other, along with their personal journeys, has always been what hooks me into this show. Whether we’re watching Raimy try to live a full life in a world she hardly recognizes or Frank attempt to piece his marriage and family back together, there’s plenty of compelling, emotional drama to be found on Frequency. Not to mention, Peyton List and Riley Smith have been pretty damn superb throughout the entire first season of the show; even when the writing has failed them, they deliver.

However, the writing fails neither actor in “Gray Line,” as both Raimy and Frank make difficult choices during the hour, decisions that could have some real, long-lasting consequences. In many ways, the father-daughter duo’s storylines mirror each other, with the two of them putting their careers at risk while also falling back into complicated romances with their believed-to-be soulmates. Unfortunately, I only see one of these two relationships working out.

For Raimy, she puts not only her career and the Nightingale investigation but her whole life at risk when she enters Deacon Joe’s house alone instead of waiting for backup. With the information she has from both Meghan and Frank, knowing that Joe’s wife was a nurse and that he was suspected of not only killing her but also his stepson, Raimy can’t stop herself from confronting the potential murderer, which leads to the episode’s most brutal scene: right before Raimy discovers the body of Joe’s wife, her hands and feet tied up with rosaries in Nightingale fashion, Joe attacks her with a crowbar, and the two of them have an intense, painful fight that leaves Raimy alive but limping. Although Frequency doesn’t do a lot of action sequences, the scenes that the show has put together throughout Season 1 have been quite impressive, going all the way back to Raimy’s takedown of Thomas Goff back in Episode 3. Sure, it’s not as complex or well-choreographed as something like the action on Arrow (which is widely considered the best action on network TV), but there’s a grittiness and rawness to the battles that Raimy and Frank have with their criminal counterparts that I appreciate.

Perhaps Raimy’s biggest mistake of the episode, though, is her decision to continue sleeping with Daniel, even after she finds out that he’s still with his fiancÃ©e, Claire. Raimy tells Daniel that she won’t be his mistress, that he has to choose to be with her and only her, and as soon as he tells her that he’s going to break things off with Claire but needs her to stand by him as he does it, the two of them fall back into bed together. However, you can tell by Raimy’s face afterwards that she doesn’t feel particularly good or happy about the situation; as powerful as her connection to Daniel was in her past life, Raimy is beginning to see the cracks in their relationship in this new world she’s created and realizes that the man she loved might not be who she thought he was. Can her and Daniel’s history, which only she remembers, be enough to keep them together, and are these secret, shady hookups really the way she wants to start over with him again? I hope not–Raimy deserves better.

Speaking of history, though, Frank and Julie obviously have a lot of that, since they’ve been married for years, and even though Frank’s time undercover tore their marriage apart, there’s still always been that strong, palpable connection between them. We specifically saw this connection in last week’s episode, as the two of them agreed that they had to always look out for Raimy’s best interest first and foremost, and it’s even more fully on display in “Gray Line,” as Frank breaks down in front of his wife, apologizing for everything he’s done to hurt her before leaning in to kiss her. Of course, that kiss doesn’t end there, as Frank and Julie end up sleeping together, although Frank looks much happier and at peace with his decision than Raimy does about her actions with Daniel. With how inconsistently written Julie has been throughout Frequency and with how complicated the Sullivan marriage has been presented to us, I doubt that Frank and Julie’s problems will be solved simply because they had sex, but this is at least a step in the right direction, a toward them fully reconciling and healing their marriage. After so many weeks of heartbreak in the Sullivan household, it’s nice to have a little bit of hope, isn’t it?

But even though Frank may be on the way to repairing his marriage, there’s one problem that he can’t seem to fix: Stan Moreno. Personally, I’ve never cared much for the Stan storyline on Frequency; while the hunt for the Nightingale Killer is tied directly into the Sullivans and their family drama, Stan’s corruptness has felt too generic and one-note for this series, something that the writers felt they needed because Frequency is technically a cop show, even though there’s so much more to it than that. Therefore, not much of Frank’s conflict with Stan landed for me in this week’s episode (since it hasn’t really landed for much of this season), but I did enjoy his conversation with Satch, since it finally allowed Frank’s partner to explain why he’s so loyal to Stan, despite the fact that he’s corrupt. I certainly care about the drama between Frank and Satch; I just wish it came from a different source.

When it comes to both the Nightingale case and Raimy and Frank’s own personal stories, “Gray Line” does a very nice job of setting the stage for this season’s final few episodes. Now that the Nightingale Killer’s identity has been revealed, Frequency can move into the more complex and compelling territory of how Raimy and Frank will deal with him. Will they actually kill Deacon Joe, as they both agree to do in the closing moments of this week’s episode? We’ll have to wait and see, but no matter what happens, it won’t be easy on either father or daughter. While things appear to be looking up for the Sullivans at the end of “Gray Line,” we all know too well that heartbreak is more than likely just around the corner.

Raimy struggles with her feelings for Daniel, and the Nightingale Killer’s identity is revealed in another excellent episode of Frequency.