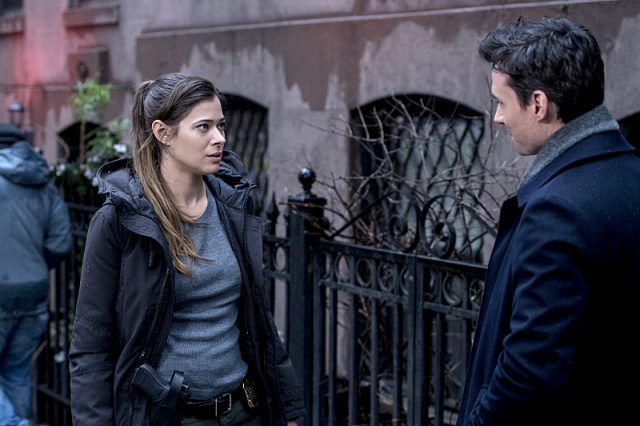 It’s a well-known fact that, in most time-travel shows, time catches up with the characters. Try as they might to change the past or create a better future, fate typically finds a balance, and it appears that in Frequency the same rules apply. Even though Raimy and Frank prevent Amanda’s abduction and murder by the Nightingale Killer in 1996, that doesn’t stop the murderer from tracking down an older Amanda in 2016 and killing her, just like how Raimy stopping Frank’s murder in the series premiere didn’t prevent him from ultimately dying before his time. Any alterations the two of them make to the timeline never seem to last for too long; somehow, some way, these events always happen, even if it’s years later, but there may be a solution to the challenges they face, a solution that Raimy finds from an unlikely source in this week’s episode, “Deviation.”

This unlikely source is Carl Pierce (played by Curtis Armstrong), who claims that he uses a communicator that he created to speak with his future self. Of course, this future version of Pierce urges the 2016 version of him to kill others in order to prevent them from taking even more lives, which is why he’s locked up in prison for the rest of his life, and even though Raimy believes he’s a con artist, he does offer one potentially helpful piece of information. According to Pierce’s analogy, time is like a tree and cutting off a branch doesn’t do anything to change it because that branch just grows back. In order to really make an impact, you have to cut off the trunk, or in other words, kill the person in the past/present before they can harm others in the future.

It’s an interesting idea that Frequency proposes, and it makes sense given what we’ve seen from the show in its first few episodes. While not everything about Frequency‘s time-travel mechanics makes total sense, we did see that when Thomas Goff died back in 1996, his very existence was wiped away from 2016. With that precedent established, isn’t the only way that Raimy and Frank can truly defeat the Nightingale Killer is by killing him in 1996, thus not allowing him even the slightest possible opportunity to ever murder anyone again? That’s what Raimy now believes, although Frank remains hesitant. Despite all the shady things he was forced to do while he was undercover, Frank insists to Raimy that there has to be another way; he’s a cop, not a killer, and he doesn’t plan on becoming one if he runs into the Nightingale Killer again.

Even though Frank’s moral dilemma is something we’ve seen before in other shows and films throughout the years, it’s still a compelling conflict for his character, and it makes complete sense that he and Raimy would have opposing viewpoints. Even though he and Julie are separated, Frank hasn’t had to live in a world without his wife yet, a world where he’s left alone to pick up the pieces of his shattered life as he raises Raimy. However, Raimy has experienced life both ways, with her mother and without, which can only make the loss of Julie even more painful since she doesn’t have to imagine what life would be like if she was still alive; she knows exactly how it would be, and she misses it. Now that Raimy has figured out a way to essentially guarantee that her mother will return to her, it doesn’t seem like she’ll ever stop pursuing it, no matter how much Frank protests.

And Frank’s uneasiness about killing the Nightingale Killer instead of arresting him doesn’t just come from the fact that Julie is still a part of his life while she’s gone from Raimy’s; it also clearly stems from his distaste for anything and everything that’s corrupt, given that he was almost painted as a bad cop during the time he was undercover. Speaking of Frank’s time undercover, Frequency delivers a pretty big shocker this week when it’s not only revealed that Frank was seeing another woman while pretending to be a drug pusher but that Stan also knows about this and is using it to blackmail Frank. Given Frank’s dedication and commitment to both Julie and Raimy, I didn’t see this twist coming, and while it’s sure to cause a lot of problems for Frank, I need a little more backstory on who this woman is and how the two of them fell for each other before I can fully buy into the storyline.

Still though, with that surprising wrinkle added, the police corruption storyline, which has never been my favorite Frequency story, gets a much-needed jolt of energy. It still doesn’t compete with the series’ main arc, but as long as Frequency continues to make me care for its two lead characters, I’ll follow this show wherever it goes.

Raimy makes a surprising request, while Frank struggles to leave his undercover life in the past in another solid episode of Frequency.