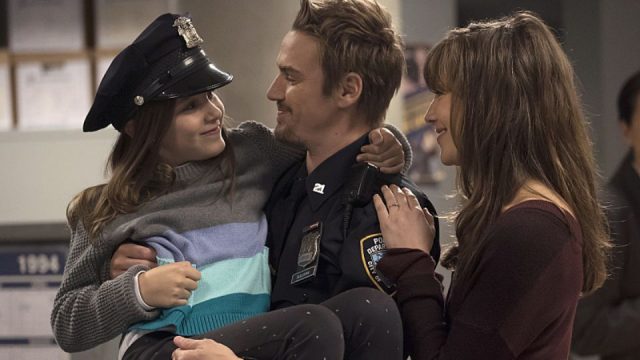 For the first six episodes of Frequency, Raimy and Frank have been at the center of all the show’s actions; everything has been seen through the eyes of the two Sullivans. However, “Break, Break, Break” changes that up a bit, giving Satch much more of a substantial role throughout the hour, as we learn how he transformed from the warmer, more thoughtful detective he was in 1996 into the hardened cop he is now in 2016. Frequency doesn’t completely turn its focus away from Raimy and Frank; the two of them are still integral to the major stories told within this episode. But Satch is certainly the star of the hour, and he serves as an example of what can happen to both Raimy and Frank if they let their jobs completely overtake the rest of their lives.

“Break, Break, Break” begins with a powerful contrast between what Satch’s life used to be like in 1996 and what it’s like nowadays. Frequency cuts back and forth between him at the bar in 1996, celebrating Frank’s rescuing of Amanda before turning down another drink because he has “something better” waiting for him at home, to the 2016 version of himself, who has the bartender turn off the TV (which plays the news report on Amanda’s murder) as he keeps on drinking before returning home to an empty apartment. In just a couple of minutes, Frequency paints a stronger, clearer picture of Satch’s character than it has in the previous six episodes; the series shows us the real toll the job has taken on his life with just a few images, and it’s stronger than any explanation or bit of exposition we get later on in the episode. Not to mention, this striking contrast between Satch’s past life and his present one provide all the reason necessary for why he would want to retire after so many years working as a cop.

Fortunately, though, Raimy is able to delay Satch’s retirement, at least for the time being, as she brings him back into the Nightingale case to follow one last lead, and since this is television, that lead pans out in a big way. Not only do Raimy and Satch discover that the Nightingale Killer worked at a camp (Highway Mountain Camp, to be specific), but that he held at least one of his victims captive there. While examining the old camp grounds, Raimy finds zip ties, wrappers, and an old bathtub in the infirmary, and she and Satch piece together a working theory on the killer: that he would cleanse his victims before murdering them, believing that by ending their lives he was actually saving them. That new twist in the Nightingale case provides that plot with some new energy, and even though Raimy’s theory might not prove to be 100% accurate, all of the evidence that she and Satch gather should help them get closer to learning the killer’s real identity in the coming episodes, especially since The CW announced on Wednesday that Frequency‘s first (and possibly only) season will wrap up after 13 episodes in January.

Still though, the most fascinating part of this week’s episode is watching Raimy slowly realize that she’s turning into Satch, or, even more so, her father, a person that doesn’t just put the job before everything else in their life but actually makes the job their entire life. That inability to separate work from home is what causes so many problems for Frank in 1996, as Myrcella, the woman he was with while he was undercover, shows up at his house and meets Julie. Due to his commitment to his job, Frank not only lost his connection with his family but he lost himself; Myrcella provided the tiniest bit of an escape from his endlessly stressful undercover existence, but she never made up for what he lost and continues to lose with her reappearance. Myrcella showing up on Julie’s doorstep causes her and Frank to have their worst fight yet, as she confronts him about his and Myrcella’s relationship before going over to Ted’s place and sleeping with him.

But even after she and Ted are finished having sex, Julie doesn’t look happy or excited or comfortable; she seems broken, despondent to what’s actually happening in her life, and that carries over to Satch’s promotion party, where she and Frank can’t even fake a smile when they take a photo with Raimy. All of this pain and heartbreak comes from the job, and it’s what leads to Raimy and Frank’s very open discussion about his time undercover near the episode’s end. After they’ve covered pretty much everything, Frank takes a moment and then asks his daughter a question that neither of them have the answer to: “What if who we are costs us everything we cherish the most?” And while I’m excited to see how everything involving the Nightingale Killer case plays out over the next six episodes, that impossible question is what I most want to see Frequency tackle in the final hours of its first season.

Raimy and Satch make a startling discovery, while Frank and Julie grow further apart in a stellar episode of Frequency.