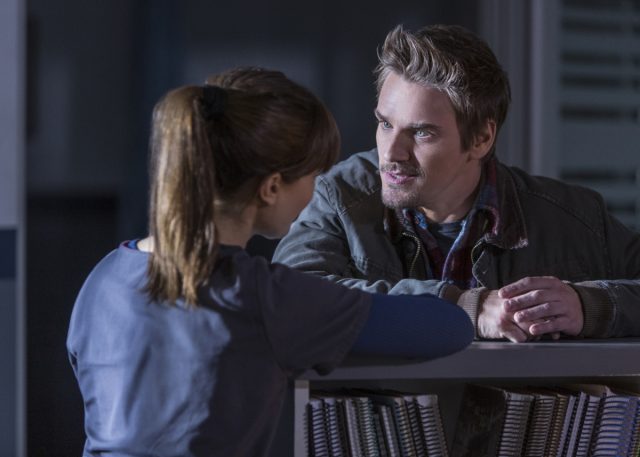 “The Edison Effect” is an engrossing and yet also frustrating episode of Frequency. There’s so much intensity and excitement throughout this hour, from the opening moments of Deacon Joe changing his appearance to Raimy chasing him down and shooting him in one of the episode’s final scenes. Plus, everything involving Frank’s preparation to take down the Nightingale Killer is nerve-wracking because since there are still three episodes left in the season (and most likely the series) after this one, you know he’s not going to actually pull the trigger and kill Joe so something has to go wrong in a pretty major way.

And of course, it does, and that’s where I have a minor issue with this episode of Frequency, as “The Edison Effect” telegraphs every problem that Frank faces. First, it’s him running into Gordo and his dad (although that is also placed in the episode to give us the necessary background on Gordo’s father before we meet him in 2016 through Raimy), then it’s the long, lingering shot on Raimy’s clarinet case in the backseat of his car, and then finally it’s him fumbling with his phone as he drives through the pitch-black night–any time a television show stays on a character for that long while he or she is driving, you know his or her car is about to get hit. So even though I’m very curious to see how Frank gets out of this situation (as I’m guessing that the Nightingale Killer will somehow escape and the cops won’t find a man tied up in Frank’s trunk), it still bothers me how predictable this storyline ends up being, especially after how well the tension is built throughout most of the hour; it felt like watching someone deflate a balloon you had just spent all your time blowing up.

What doesn’t disappoint, though, is Raimy’s pursuit and murder of Deacon Joe in 2016, as Frequency again crafts another exciting and surprising action sequence. Megan’s death is both shocking and sad, and honestly, after Joe miraculously avoids the police when fleeing the cabin, it becomes a very real possibility that he’ll escape altogether, which would have been an incredibly dissatisfying conclusion to this episode. Instead, Frequency gives us the chase that we all wanted, as Raimy runs after Joe and pins him down, and while most shows would allow their main characters to be the “good guys” and take the criminal into custody, Frequency makes a daring choice and has Raimy shoot a defenseless Joe, telling herself and the cop that sees her do it that it won’t matter come tomorrow.

That reckless attitude affects most of Raimy’s behavior throughout “The Edison Effect,” as she believes that Frank will be able to kill the Nightingale Killer that night, thus saving her mom and changing the present for her all over again. In her mind, the day she’s living is a free one with no consequences, and she tries to soak in every last bit of it that she can, from lying next to Kyle in his hospital bed to pulling the trigger and killing the man who murdered her mother and countless others. The unpredictability of Raimy’s actions ensures that the 2016 storyline in this episode is more captivating than the 1996 one, and it also sets up an even more complicated situation for Raimy than the one that Frank finds himself in back in 1996. With the present staying the way it is, Raimy will not only have to still figure out her feelings for Kyle and Daniel (who she tells not to break-up with his fiancÃ©e, ensuring that the girl will have one more night of happiness), but more importantly, she’ll have to deal with the consequences of her murdering Deacon Joe in cold blood.

With how things end in “The Edison Effect,” it’s hard not get excited for the final three episodes of Frequency. I may not have fully loved everything that got us to this point, but now that we’re here, I’m anxious to see what Raimy and Frank will do next and if there will somehow be a happy ending to what has been a pretty tragic story for both of them so far.

Frank prepares to take down the Nightingale Killer, while Raimy learns more about Kyle in an exciting episode of Frequency.