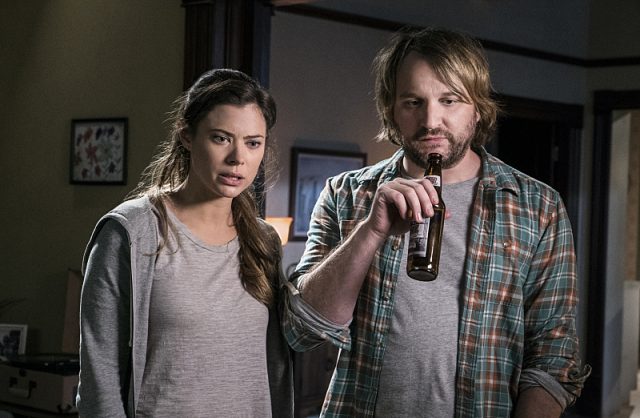 One of my favorite things about Frequency is how the show is able to take the typical “case of the week” structure and do something entirely new with it. The time-travel aspect of the series forces Raimy and Frank to not only work together but to have to use such specific and unique methods of investigating that their partnership (even without the daughter-father aspect of it) is pretty much unlike anything else on television right now. And what’s even more fascinating than some of the crazy ways the two of them must share information with each other, like how Raimy is able to help Frank create a sketch of the Nightingale Killer in this week’s episode, are the slight differences and developments we see in the people that they investigate, whether it’s suspects or victims. The roles these characters have played so far in Frequency ensure that the audience is always guessing, and they keep the mystery and thriller components of the series alive, even as the more emotional moments continue be the real highlights of the show.

Frank and Raimy come closer than ever to catching the Nightingale Killer in “Bleed Over,” as the two of them use their combined knowledge to learn more about the murderer. Many of these new details come from Eva, a nine-year-old girl who witnessed her mother’s kidnapping by the Nightingale Killer in 1996. However, Eva is also a 29-year-old, fame-obsessed woman in 2016, who will literally do anything to regain the spotlight.

Eva proves to be a wild card in this week’s Frequency, both in the past and the present. In 1996, she admits to Frank that she saw the Nightingale Killer up to seven different times over the course of several months while her mom was having an affair, revealing that the serial killer stalks his victims before taking them. Meanwhile, in 2016, Eva claims that she was taken by Nightingale, but the truth is that she staged the entire incident to get publicity. Even though Eva could be considered purely a plot device used to help Frank discover more details about the Nightingale Killer, she also serves a haunting image of what fame can do to some people; once they get a taste of it, they become addicted to it, like a drug, and they’ll do whatever it takes to gain that fame back.

But even though Eva is shown to be a liar in 2016, she does tell the truth about the Nightingale Killer’s truck in 1996, which leads to one of Freqeuncy‘s most intense scenes yet. Frank watches as Julie and Raimy play in the park before spotting the blue truck Eva described. He approaches it, holding his badge up and asking the drive to get out of the car. Of course, the blue truck speeds away (and we later see the killer burning the vehicle, so that Frank won’t be able to track him down again), but in those few seconds before it zooms down the street, we’re left wondering what will happen. Will Frank and the killer get into a physical altercation? Will Frank be able to jot down the licence’s plate number and figure out who this guy is? It’s a really well-executed scene.

That scene also leads to another conversation between Frank and Julie, where it appears that she is finally beginning to understand just how serious the threat to her life is. Frank still can’t tell her how he knows she’ll be a victim, but Julie seems much more understanding when he admits that she is in very real danger. Maybe this talk, along with other actions Frank will take later on, will help stop Julie’s murder, but he and Raimy can’t be sure. All they can do is keep trying and hope for the best.

And even though there is still hope that Julie will be saved, Frank does his best to make sure that Raimy isn’t holding on to that hope like it’s a guarantee. As we’ve seen in previous weeks, Frank is sometimes an even better father to Raimy in 2016 than he is in 1996, and this time, he helps convince her to not keep her life on hold as they try to save her mom. Sure, there’s a chance that rescuing Julie could set everything right with the timeline and that she and Daniel could magically be back together again, but nothing in life is 100% certain, which is why Frank encourages his daughter to go out and live every day to the fullest.

Frank’s advice works, as Raimy asks out the cop she had hooked up with before, not allowing the possibility of her and Daniel to stop her from enjoying the time she does have. And Frank listens to his own words as well, keeping true to his promise from last week’s Frequency that he would spend more time with his daughter in 1996, even as he continues to worry about the adult version of her in 2016.

Thanks to the magic of an old radio, Raimy and Frank have been given the gift of more time with each other, time that they were never supposed to have. However, as Frequency makes clear throughout “Bleed Over,” the importance of their pasts and futures shouldn’t prevent either of them taking advantage of the valuable time they have in the present.

What did everyone else think about this week’s episode of Frequency? Comment bellow and let me know.

Raimy and Frank discover new information about the Nightingale Killer in another strong episode of Frequency.