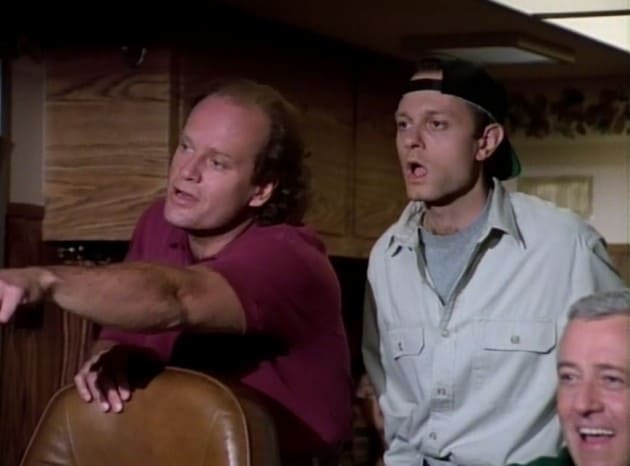 “Travels with Martin” marks a return to form for Frasier; after dipping its toes into the lesser waters of romantic entanglements and office dramas, “Travels with Martin” brings the focus back to exploring the relationships between Frasier and his father and brother. However, regaining its sense of pathos doesn’t always make for an instantaneous return to quality; like the titular road trip Frasier and his father embark on, “Martin” occasionally diverts its attention off course for journeys into lesser stories, never quite extending itself beyond a mildly pleasant episode into something truly lasting and resonant.

Where the episode finds its foothold is where it often does, exploring the dissonance between generations of Crane members. In particular, the way a road trip turns this story into a reverse Frasier is kind of fascinating (or Bizarro Frasier, to make an NBC-related pun). While on the road, Frasier suddenly turns into the very man he criticizes on the radio: his measured ways go flying out the window, constantly trying to convince Marty to go off course and let the road define the trip for them. That wide-eyed optimism is a bit out of character for Frasier, but in the context of “Travels with Martin,” it’s actually a bit refreshing: slightly removed from his clownish (and prickish) self in recent episodes, we get to see Frasier exude some childish glee (which later extends to childish frustration when Marty refuses to stop for Niles and Frasier).

By the same token, Marty becomes a mirror of himself. Back in Seattle, Marty is often the one pushing Frasier outside his preconceived definition of self, often acting as a catalyst to Frasier putting himself out there more as a human being (if there’s one thing the first season of Frasier establishes, it’s that Frasier post-divorce is a little more reserved when it comes to taking risks, even if he still speaks his mind far too often). Here, it’s Marty who wants to read a road map and stay on the straight and narrow; it’s ultimately Frasier that encourages them to divert their way and end up in Canada, putting Daphne’s delicate immigrant status into jeopardy.

Once the Cranes are across the border and “Martin” shifts its attention, it loses a bit of its impact: while it’s nice to see Marty step up and help Daphne out when a pushy border patrol officer starts sniffing around (perhaps because Daphne could only say one word in English?), it doesn’t quite have the same impact as the conflict preceding it, where Frasier and Marty’s diametrically opposed views were flipped (a reflection of how different we can be behind the wheel of a car, which is true for everyone). Every episodes needs its laughs, sure, but the disconnect between the main story and this suddenly-introduced B plot is a bit jarring – and it begins to suck some of the life out of the episode.

That is, until the border situation dissolves, and Frasier and Marty can enjoy the night drive together, while an overexcited Niles and stressed Daphne rest in the back of the camper. The two admit to each other they brought buffers along because they’re afraid to hang out with each other alone – and slowly, as they talk, their honesty naturally breeds catharsis, which gives “Travels with Martin” this lovely third-act coda of father and son driving until the sun comes up, not quite ready to end the best trip they’ve taken together in years. It’s a touching, surprisingly earnest moment, coming right on the heels of some typical Frasier shenanigans, both in the scenes and episodes preceding it; heading into the season’s final three episodes, it is about the most encouraging image the show could’ve offered, a promising sign Frasier‘s regaining its footing around the final bend.

– Niles putting on a baseball cap.

– “Oh Winnebago boy” is still a joke I make to people; I don’t think anyone has ever gotten it.

– “This calls for a celebration! I think I’ve got a couple of beers… and there’s a bag of pork rinds back here somewhere!”