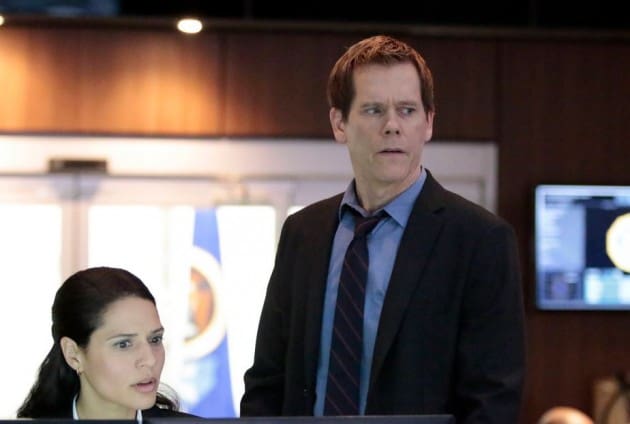 The Following continued its strong third season this week with another gripping, terrifying installment. This episode marked the return of Joe Carroll, the end of another villain, and the dawn of a third villain, who might be the shows most terrifying baddie yet. And what a thrill ride it was.

This week on The Following: Ryan seeks Joe’s help in locating Dr. Strauss, promising him visits in return. Dr. Strauss and Daisy go into hiding, with the help of some more of Strauss’ pupils. Mike and Max deal with fallout, and all the while Tom is spying on them. Ryan and Mike are assisted by a local police officer (Smallville‘s Allison Mack). A new, scarier killer emerges.

Wow. The Following has really stepped things up. I could’ve lived with Dr. Strauss being the villain this season, but what they’ve come up with is much more meaty and complex. Dr. Strauss spent so many years in hiding, how would he all of a sudden become a scary killer? No, I think they did the right thing by creating more Dr. Strauss pupils. It makes a lot of sense that Dr. Strauss would have others. That Joe wouldn’t be the only one. That Joe wouldn’t even be the best one. Theo (played by Almost Human‘s Michael Ealy) was the perfect twist element. Not only is he a dangerous killer and a genius computer hacker, but he is also a (Spoilers!!) FATHER.  (More spoilers!!) Theo kills Dr. Strauss because he feels it necessary, but he clearly has his own code. He has a wife and children. He let Daisy live. I have no idea what is motivating Theo, but I’m certainly excited by his arrival.

I wasn’t totally convinced that the charges against Ryan and the FBI would just be dropped and done with. However, I’m more certain that they will continue to play into things. Tom, for instance, has just discovered (via illegal surveillance…boyfriend of the year) that Mike executed Lily Gray. I love that the gang has been facing consequences for their approach. The whole show feels more grounded now. And just as they got off the hook for one thing, Tom’s new knowledge will certainly throw an interesting kink into the chains. Oh, and is anyone else suspicious of Ryan’s girlfriend? I mean, you’re kind of supposed to be suspicious of everyone on this show, but I’m very suspicious about his girlfriend.

One of my favorite things to explore this season has been the Mike/Max relationship. How Mike wanted to find Mark more desperately than be with Max. How they clearly still love each other. How they were just starting to become close again when Mike’s desire to kill Mark took over him again and left Max in danger. They certainly don’t have the greatest track record as a couple, but it’s so intense to watch how these killings and these evil characters can affect people who obviously love each other. I’m so fascinated by all of it. Jessica Stroup and Shawn Ashmore have been fantastic.

I think that a lot of people take Kevin Bacon for granted on this show. When I mention The Following to people, most o them say “Oh, the Kevin Bacon show?” so it is kind of odd that I’m saying this. But what I mean is that Kevin Bacon IS the show, so people accept him as part of the show’s reality. Each week, Bacon brings something special to the role of Ryan Hardy. He brings this special gravitas to any scene. His scenes with Joe (the BRILLIANT James Purefoy) this week were some of the best I’ve seen from The Following. The humanity that Bacon brings to Hardy is unreal. I was emotionally invested, more than anything else, in Ryan throwing up after seeing Joe the first time. It was just such a human thing to do, and it was a good reminder of the terrors that these characters went through.

All in all, another solid, thrilling episode of The Following. It always keeps me on the edge of my seat, and I can’t get enough!

What did you think of this week’s episode? Did you enjoy it as much as I did? Let us know in the comments!