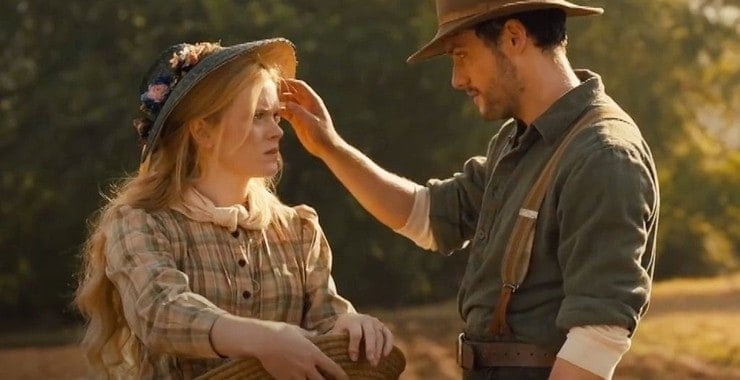 Redeeming Love that takes place back in the California Gold Rush of 1850. The feature centers around Angel, who grew up in a world of prostitution after being sold as a child. Angel has survived on anger and self-loathing until she meets Michael Hosea and discovers true love for the first time in her life. The romantic drama features veterans Logan Marshall-Green and Famke Janssen, who are no strangers to being in great films. This list will focus on the five best movies involving the cast of Redeeming Love. Each of the movies has ten or more favorable reviews. The only features exempt from this list are animated. Let’s get started with the first movie.

In this excellent slow-burn of a thriller, a man’s suspicions haunt him when his ex-wife and her new husband invite them to a dinner party out of the blue. The Invitation manages to expertly squeeze out its simple premise by building up the story until the chaotic climax. Obviously, we understand that something big is going to happen in the third act and it isn’t too hard to figure out as the story moves along; however, that doesn’t make the film less engaging as Karyn Kusama’s confident direction leads to satisfying results. Again, the only nitpick is that it becomes obvious what’s going to happen pretty soon, with the most notable sign being the couple showing a video of the time they spent with a cult leader in Mexico.

In this wickedly entertaining and futuristic feature, Grey Trace is left paralyzed following a brutal assault that resulted in his beloved wife’s death. A billionaire gives him an offer that is hard to refuse — an artificial intelligence implant called STEM that can enhance his body and mind. Grey is able to walk and finds out that he has superhuman strength and agility and uses these skills to seek revenge against the men who destroyed his life. While the “robots are evil” narrative is nothing new, Upgrade makes use of the cool sci-fi premise and delivers some great action-packed fun along the way. The story isn’t as predictable as it seems, and the characters are an engaging source that helps bring this colorful world to life. Logan Marshall-Green brings a nicely grounded and charismatic performance to the lead role and his interaction with the artificial intelligence leads to several hilarious and fun moments.

In the thrilling first chapter of the Tom Holland saga, young Peter Parker is fresh off of his experience with the Avengers and now must navigate everyday life while keeping his superhero persona a secret. Under the guidance of Tony Stark, Parker embraces his newfound power as Spider-Man, which will soon be tested when the evil Vulture emerges to threaten everything that he holds dear. Spider-Man: Homecoming wisely avoids going through another origin Peter Parker story and expands the world of Spider-Man. Seeing some of The Avengers take part in this world gives the franchise the much-needed freshness that it was sorely lacking, but it also helps that Tom Holland fits the Peter Parker/Spider-Man role like a glove. Spider-Man: Homecoming does a great job of blending action, humor, drama, and heart of the signature Marvel series.

This smart and compelling sequel to the 2000 hit explores the past of Wolverine thanks to Stryker, a former Army commander who holds the keys to his and the X-Men’s future. Stryker makes it his mission to take down Professor Xavier and his school of mutants, which prompts them to form an uneasy partnership with Magneto to fight their formidable new enemy. Surprisingly more of a character driven piece then an action vehicle, X2 happens to be one of the more underrated superhero films as it’s easily one of the better features within the genre. A compelling villain and a nicely layered look into the backstory of Wolverine helps pad out the runtime, while the tease of a Dark Phoenix is nicely foreshadowed at the end of the film.

The Perks of Being a Wallflower

This great coming-of-age story follows Charlie, whose considered a wallflower due to him always watching life from the sidelines. Eventually, a free-spirited Sam and her stepbrother Patrick come into Charlie’s life and help him discover the joys of friendship, love, music and more. However, while his new friends prepare to leave for college, Charlie’s inner sadness threatens to ruin his newfound confidence. The Perks of Being a Wallflower delicately balances it’s sensitive subject without ever crossing a line or be overly melodramatic. The chemistry between the three leads helps boost the solid script and the story of Charlie is a relatable one that many can easily identify with.