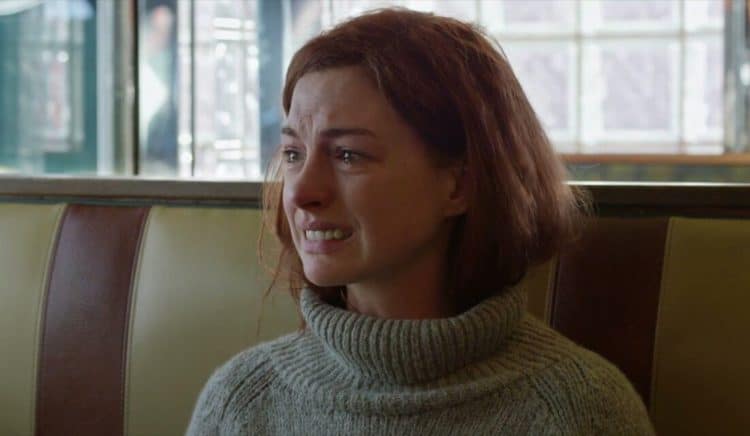 Anne Hathaway has transformed from a teeny-bopper star to a renowned actress right before our eyes. We first grew to love her as Princess Mia Thermopolis from the famed The Princess Diaries franchise before she proceeded to elevate her craft, and become the movie star she is today. Hathaway has breathed life to a wide variety of characters, who were nothing short of impactful. The acting nominations and awards she has received through the years already speak for themselves. Decades have already passed since we were first blown away by Hathaway’s megawatt smile and charming demeanor, yet she still manages to keep us excited about her upcoming projects. Here are five of Hathaway’s best crying scenes, in no particular order:

The second installment of the famed movie franchise followed the journey of Princess Mia Thermopolis as she prepares to take on the role as future queen of Genovia. This new chapter in her life is filled with major changes, including an arranged marriage with Andrew Jacoby, portrayed by Callum Blue (Smallville), as well as a secret love triangle with the naughty Lord Nicholas Devereaux, portrayed by Chris Pine (Wonder Woman). The scene where Mia was caught snuggling with Lord Nicholas on film was detrimental for the image she was trying to protect. She cried out of frustration and a feeling of betrayal, as she believed at that time that it was Lord Nicholas who planted the secret camera footage. Hathaway embodied the role of Princess Mia by heart, and gave the character a justifiable story arc and progressive character development.

Viewers saw a totally different side of Hathaway in the drama film, wherein she portrayed the role of Kym Buchman, a recovering addict who continues to suffer from mental illness. The film traversed the complicated familial relationships that surrounded by past traumas and unresolved issues. The scene where Kym and her family get into an argument was explosive and painful. Past rifts were brought up, which led Kym to unearth the tragic experience of being responsible for her younger brother’s death once again. This rehashed a lot of old wounds and brought the family members further apart.  Hathaway gave justice to this complicated character who was in need of all the help and consistent support from her loved ones.

The film adaptation of the classic musical was one of the most anticipated movies during its premiere. It featured a stellar ensemble and timeless storyline whose legacy will continue to surpass generations. Hathaway portrayed the role of Fantine, a poor single mother whose dire life circumstances led her to become a prostitute, who later contracted a fatal disease. One of the most powerful scenes in the film was when a weakened Fantine sang the song, I Dreamed A Dream, which spoke of her past experiences and current desperation. She did not deserve all the hardships that were thrown her way, and it was painful to watch her character deteriorate throughout the film. Hathaway’s gripping performance also made her win her first Academy Award, which was well-deserved on all fronts.

Hathaway is so effective in romantic comedies like this film because of her depth of emotion and undeniable chemistry with her leading men. Hathaway portrayed the role of Maggie Murdock, a young woman suffering from Parkinson’s disease, while Jake Gyllenhaal (Brokeback Mountain) portrayed the role of Jamie Randall, a medicine peddler. The two characters fall in love and begin an unexpected romance. The scene where Jamie bore his true feelings to Maggie was vulnerable and romantic. Maggie does not want her disease to be a burden to Jamie and distances herself from him. This does not stop Jamie from wanting to be with Maggie, who tells her that he loves and needs her. The road ahead may be filled with challenges, but true love understands sacrifice without expecting anything in return.

The comedy drama was the collaboration we never knew we needed. It brought together Robert De Niro (Taxi Driver), who portrayed the role of Ben Whittaker, a 70-year-old widower who gets accepted for a job as a senior intern at an online fashion website, and Hathaway, who portrayed the role of Jules Ostin, the savvy and workaholic owner of the online fashion website. Ben and Jules form an unlikely bond and friendship, which made them both grow as individuals. Ben learned that age is just a number, and it’s never too late to learn something new, while Jules learned that there is more to life than your job. The scene where Jules’ husband, Matt (Workaholics), portrayed by Anders Holm, begged for Jules’ forgiveness after she caught him cheating is touching and intimate. Jules became too engrossed in building a successful company that divided the time spent with her family. Cheating is never an excuse, and Matt learned his lesson the hard way. Jules also learned how to re-prioritize her life and give love a second chance. It’s a heartwarming movie that was successful in tugging viewers’ heartstrings.