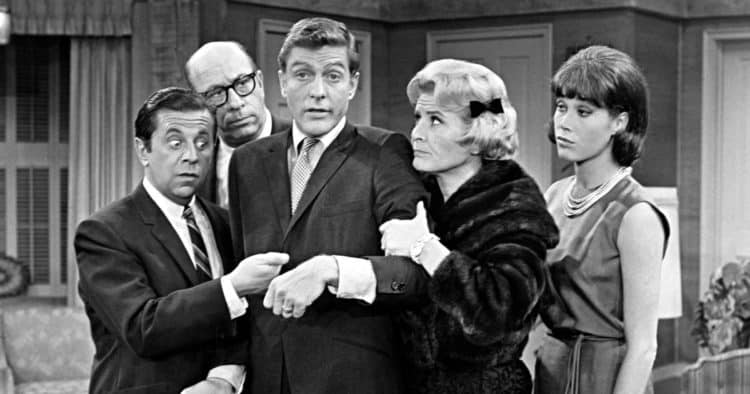 Believe it or not, Dick Van Dyke is still kicking butt at 96 years old. And he’s not spending his ninth decade on Earth in peaceful retirement. The actor is still very much active in front of the camera, with his last film appearance being a starring role in 2018’s Buttons: A Christmas Tale. In 2020, he played a role in Jim Carrey’s Kidding, which airs on Hulu. Dick Van Dyke has an upcoming movie projected titled Capture The Flag, which is currently in pre-production. With a career spanning more than 70 years, Dick Van Dyke has been able to establish himself as one of the most revered actors in Hollywood, with movies like Bye Bye Birdie, Mary Poppins, Chitty Chitty Bang Bang, Comic, and in later years, Night at the Museum and Night at the Museum: Secret Tomb. He also starred in his own TV show The Dick Van Dyke Show, which is constantly ranked as one of the best TV sitcoms of all time. When asked by Parade what keeps Dick Van Dyke going at his age, he responded that he simply loved what he does. “I just love the work. I love to do it. You tell Robert [Redford] that retirement is a very bad idea. Very bad. He’s a very creative guy and he should keep going. He can slow down but if you’re doing something you like doing, then why retire from it? It doesn’t make sense.” Dick Van Dyke’s legacy is one that deserves a properly made biopic. If movie execs decided to develop a biopic detailing the thespian’s life and legacy, here are a few casting suggestions to help them visualize a Dick Van Dyke biopic on screen.

Chris Pine, who is already in his 40s, is the perfect actor to play Dick Van Dyke during his days on the set of Mary Poppins and Bye Bye Birdie. While the actor has mostly appeared in action and fantasy films, including Wonder Woman and A Wrinkle in Time, Pine has some experience playing real-life and historical people in biopics. In 2018, he portrayed Robert the Bruce in the Netflix movie Outlaw King. He also played coastguard Bernie Webber in The Finest Hours and winemaker Bo Barrett in Bottle Shock. The actor is set to appear in The Contractor, Don’t Worry Darling, and Dungeons & Dragons. According to IndieWire, Pine wouldn’t hesitate to take on roles that feature strong masculine figures, which Dick Van Dyke very much is. It also won’t matter very much whether the role is on TV or on the big screen. “To date, Pine hasn’t branched out to a lot of television projects as many movie actors have done, but he did land a recurring role on the Netflix-produced series adaptation of “Wet Hot American Summer” and would be open to doing more.”

Also already in his 40s, Chris Evans would play Dick Van Dyke very well in a potential biopic. Like Chris Pine, Chris Evans has mostly appeared in action movies, most notably starring as Captain America in the Marvel Cinematic Universe. He’s also played roles in Before We Go, Gifted, and Knives Out, for which he received critical acclaim. Evans is set to star in two movies in 2022, Lightyear and The Gray Man. As far as biopics are concerned, Chris Evans hasn’t had a lot of experience, but given his acting range, portraying Dick Van Dyke in a biopic about his life and work shouldn’t be too hard. Chris Evans played real-life lawyer Mike Weiss on Puncture, a movie that received mixed reviews but earned Chris Evans acclaim, including from Roger Ebert, who wrote, “Electrifying in the role, Evans reminds me of other great out-of-control druggies played by Al Pacino and Nicolas Cage. A movie like this is a reminder that box-office success can be unfair and limiting to gifted young actors.”

You might think we’re purposely casting action stars here, but Downey would seriously be a great fit to play Dick Van Dyke in a hypothetical biopic. Without even mentioning his appearances in the Marvel Cinematic Universe, Downey has a long list of critically acclaimed movies under his belt, including The Judge and Kiss Kiss Bang Bang. People often forget that Robert Downey Jr. was actually a cast member of Saturday Night Live, so he should have some experience with comedy, which should come in handy if he’s ever given the opportunity to portray Dick Van Dyke in a biopic.

Given Ryan Gosling‘s experience in cinema, it shouldn’t be too much of an issue for him to portray Dick Van Dyke in a hypothetical biopic. Gosling has some experience in biopics, having played astronaut Neil Armstrong in the biopic First Man opposite Claire Foy. Gosling’s performance in that film was critically acclaimed, so Dick Van Dyke’s legacy should be in good hands if ever the role lands on Gosling’s agent’s desk. Gosling is set to appear in The Gray Man, a movie directed by Anthony and Joe Russo. In an interview with Gotham, who asked him whether he only chose roles that scared him, Gosling explained how he chose his roles, which should provide us with some insight on how he is going to approach a hypothetical Dick Van Dyke biopic. “I’ve said a lot of things over the years—some of which I actually agree with. I think what I meant was that I didn’t really know how to do it any other way. Since I didn’t go to school for this, all my learning has had to be on the job. In the beginning, I spent most of my time convincing people that I knew what I was doing and the rest of my time trying to convince myself. I was always in what seemed to be sink or swim situations. I did my share of sinking; the internet can attest to that. But I got used to working under pressure and kept seeking it out because it’s all I knew.”

Last on this list is Jake Gyllenhaal, who is another actor who would portray Dick Van Dyke very well on screen. Gyllenhaal has been acting since he was a child, so taking on challenging roles like Dick Van Dyke shouldn’t be too hard for the experienced actor. Gyllenhaal has appeared in a wide range of films, from action movies like Spider-Man: No Way Home to psychological thrillers like Nightcrawler. Gyllenhaal has appeared in a number of biopics, most of which have been critically acclaimed. In 2017, Gyllenhaal appeared in Stronger, playing Jeff Bauman, who lost his legs during the Boston Marathon bombing. He also played a role in Everest as mountaineer Scott Fischer. Given this list of biopic roles, Dick Van Dyke’s story would be excellently portrayed by Gyllenhaal if he’s ever given the opportunity to do so.