Home
Movies
The Five Best Alien Movies of the 90s 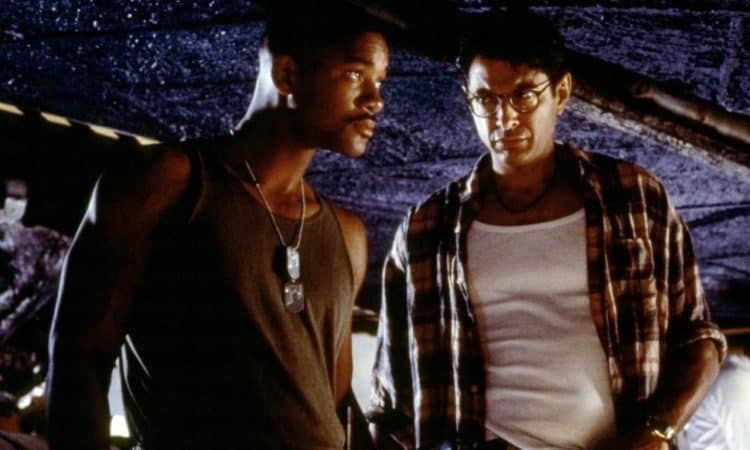 So what’s worse, not knowing if we’re alone in the universe, or knowing that an alien species could obliterate us if they tried? In the 90s, just as in several other decades, the human imagination has concocted a number of different scenarios in which we either travel to space and get our butts handed to us, or we stay on our planet and the aliens come to us and we get our butts handed to us. Like it or not it doesn’t seem to matter how smart we are, the aliens that our imaginations cook up are always smarter, tougher, more advanced, and more willing to throw vast resources at us in an attempt to break us and send us cartwheeling into the arms of oblivion. But there’s usually one thing that aliens don’t seem to count on, and that’s the fact that humans are just that obnoxiously stubborn and refuse to go down quietly.

Here are some of the best alien movies from the 90s.

This is a different kind of alien film in that it involves a ship that’s turned sentient, and because it does brush up against a very theological premise that could be described as the continuing battle between good and evil. When the Even Horizon disappears years earlier on what was supposed to be an exploratory voyage it was considered to be the worst space disaster on record. But when it comes back it becomes a mystery that needs to be solved, especially considering that its crew have all been slain and are not all accounted for. As the rescue crew sent to investigate begin to realize their peril the ship starts taking them out one by one, preying upon their fears and darkest secrets to break them.

In all honesty this one wasn’t meant to be much more than an action film with some token drama thrown in to break up the moments between the fights. Johnny Rico is the slightly rebellious but strong team leader that is all go no quit, while Carmen is the dedicated flight officer that he loves but can’t be with since she chooses her career over him. In the meantime, the enemy is a race of insectile creatures that can somehow fire meteors into space on trajectory courses that manage to hit the earth and destroy entire cities, and they’re controlled by a hive mind that sucks the brains out their victims. It’s an action film for the most part, and is the best of the bunch since it did spawn sequels.

Once again belief intersects with science fiction since even when the five elements are gathered there is one intrinsic element that can’t be ignored and it’s the one that finally convinces Leeloo that humanity is worth saving, love. One might argue that a perfect being would realize that as much filth and destruction is committed on behalf of humanity there is also the capacity for greatness that can surpass the ugliness that is done on a daily basis. But the idea that she had no one to show her this or to personally admit that love is in fact a powerful and overriding force was what she needed to finally make up her mind.

The one thing about this movie, well, one thing among many, is that when a stranger comes and sits on your porch, metaphorically-speaking, it can be seen a neighborly act or an act of aggression. When more than one neighbor comes to your property, and they sit on various spots that are of importance to you, the feeling becomes less positive and more likely to provoke a reaction. And yet in this movie the reaction is mostly awe and a wonder at what the visitors might want. And yet when one person, who is admittedly one of the smartest people in the whole movie, figures it out, it still takes people a while to get moving.

Kind of like Starship Troopers, this one was meant to be fun, but it was also meant to be somewhat insightful. Humans are a lot weaker and less knowledgeable than other species in this film, but they’re still shown to be highly capable and ready to take on any serious threats that come their way. Kay and Jay are the kind of team that don’t click right away but can at least back each other up and know that the other will do the same when it comes down to it. To be honest it was kind of a surprise when Kay was neuralized at the end, in fact he requested to be, but obviously it was considered and decided that the movie couldn’t do much without him since he came back in the second and third movies.

Aliens are just tougher than humans according to our imagination.