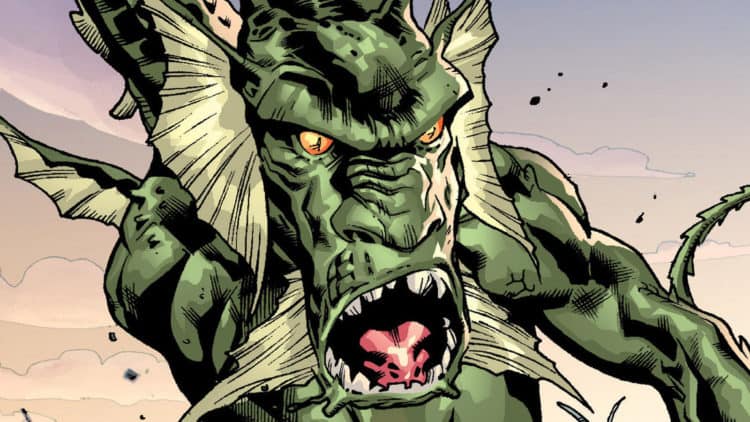 Who is the biggest and most popular monster character in Marvel Comics? That unique honor goes to the dragon-like alien known as Fin Fang Foom. Out of all the kaiju monsters that have plagued the heroes of the Marvel universe, this one has caused the most trouble. The fact that he debuted in the Stranger Tales series back when Marvel Comics was actually Atlas Comics shows that he goes way back. And yes, he was one of Stan Lee’s creation. As him where he got the outlandish name from, and he’ll tell you the 1934 Chinese movie version of Chu Chin Chow. That served as the inspiration behind the name, Fin Fang Foom. See the resemblance? I kinda do, but I can understand where Stan Lee got his inspiration. I think it’s just the fact that both of their names have catchy rings to them. The point is, I think it’s time Marvel debuts Fin Fang Foom in their cinematic universe. I remember back when I watched the trailer for Shang-Chi and the Legend of the Ten Rings and spotted that familiar dragon underwater. How many of you thought that was Fin Fang Foom. Well, it turns out that the dragon we saw in the trailer wasn’t our dragon. Although, it’s pretty clear that the look of the Great Protector was highly inspired by the serpent appearance of Fin Fang Foom. And the fact that the Great Protector fought with the heroes just erased all doubts in our minds. Looks like we would have to wait a little while longer to see Marvel’s greatest kaiju in the MCU.

I must say, however, that his debut could be coming much sooner than we think. I have no evidence to support this theory, but I have good reason to speculate. Fin Fang Foom would eventually become a recurring foe for Iron Man, often fighting with the Mandarin. We’ve seen that in animated movies and the old Iron Man cartoon from the ’90s. In fact, a particularly awesome image of the dragon appears in the first Iron Man movie. If you look closely, you’ll see that it closely resembles the version created by popular Iron Man comic book artist Adi Granov. This very cool armored design goes back when Iron Man fought the villain in the Viva Las Vegas miniseries. At the time, I thought this basically solidified an inevitable interaction between Iron Man and his kaiju enemy. Boy, just imagine what kind of battle that would have been. I honestly don’t think that’s a villain Iron Man could have beaten on his own. Whenever there’s a dragon involved, you know the hero is in for a tough fight. The first time I was introduced to Fin Fang Foom is when I played the 2006 Marvel: Ultimate Alliance video game. For a first final boss battle, it was certainly surprising to see a big dragon attacking the Helicarrier. And it took four major heroes to defeat him. Yeah, I think if Robert Downey Jr.’s Iron Man confronted this enemy, he would have quickly realized that he needed backup.

Unfortunately, that’s a fight we will probably never see in the MCU. That’s okay, because we can just see other heroes fight this terrifying villain. The only question is which heroes? After seeing Shang-Chi literally ride a dragon to fight a demonic, dragon-like monster, I would place the heroic martial artist on the top of the list. Oh, and I should probably point out that Fin Fang Foom has the appearance of a dragon, but he’s actually an alien. You know, and alien that just so happens to look like a dragon. Call it weird, but it’s super cool. Fin Fang Foom comes from a distant planet known as Maklu, and arrived on Earth near the end of the ancient Chinese dynasties. That explains that aspect of the character, but above the typical powers you would expect a dragon to have, one of his main powers is shapeshifting. Like the rest of his kind, he can mimic human form alter his size. At one point, he used this ability to make himself smaller so he could work as a chef. Oh yeah, things can get very wacky in Marvel. Who’s to say that the MCU can’t take it to that level.

I think that if they’re going to go that route, only one director comes to mind. That would be James gunn and his rather unusual style. Not to mention, he has already made a habit of bringing in less popular comic characters to play big parts in his movie. You want an example? The Suicide Squad fighting Starro the Conquerer. Never, in a hundred years, did I ever expect to see that particular villain in live-action form. But because of James Gunn and his preference for the weirder characters, we actually got it. The same can be done for Fin Fang Foom. And since I brought up James Gunn, you can totally guess what movie I’m going to say next. How about the Guardians of the Galaxy vs. Fin Fang Foom? Now that’s a fight that would blow everyone away. What are your thoughts, Marvel Fans?