Home
Movies
Did You Know Bill and Ted is Actually Based in Real Science? 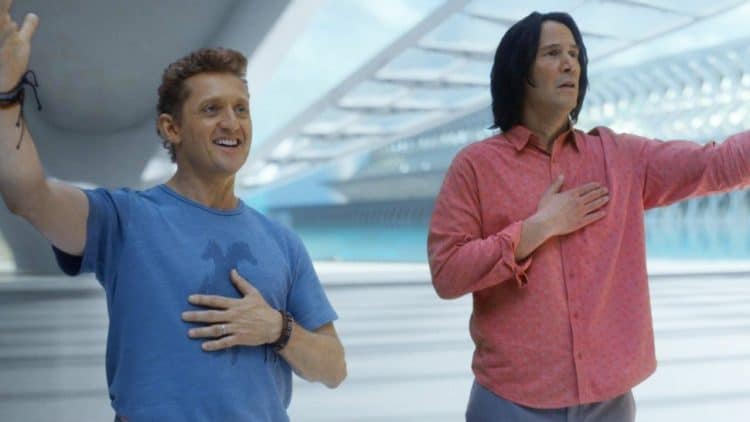 It’s great and all when someone says that a movie is based in real science, but it’s a bit frustrating when the claim is made, and then the person kind of forces others to go do the digging instead of offering any substantial explanation for the claim. Doubting a renowned physicist such as Spiros Michalakis at this point probably isn’t wise, but thinking of time travel and the possibility behind it is still something that would get a lot of people to scoff. That, and the fact that some articles on the internet are bound to state the same fact, that Spiros says it’s entirely possible, without offering so much as a crumb of proof to make it stick even further, is beyond maddening. If you’re looking for the explanation here then you might want to go elsewhere since while it might be that Milos knows what he’s talking about, and there’s no doubt that he does, it’s still more enjoyable to simply sit back and enjoy the movie for what it is without having to delve into the more scientific aspects of it. That might sound like a lowbrow way to go about it, especially since people want to profess that they’re interested in knowing as much as possible, but when it comes to time travel the arguments are bound to start early and not finish until someone starts to raise their voice since the whole idea is something that people are fascinated by but aren’t ready to embrace on the same level just yet.

It’s very likely that Spiros, who has been a consultant on many movies apparently, would regale anyone that’s willing to listen with tales of how real it is and how the science is supported in the movie. Of course one of the things that many people might ask is why we don’t see some sort of time-traveling apparatus suddenly appearing out of nowhere, but the answer to that would probably be something along the lines of ‘how do you know nothing does?’. Keep in mind, a lot of people would gesture around them and say that if anyone from the future had an inkling of what was going to happen then 2020 would have been less than a distant memory at this point. But then again, as we’ve seen time travel unfold with Bill and Ted, changing the past doesn’t do the future a lot of favors, but it also doesn’t appear to affect as much outside of a person’s sphere of influence either. What this means is that the butterfly effect that so many people want to believe in, the idea that if you change one thing in the past that you’ll have to eventually change everything in the present or future, might not be the only idea that people are willing to adhere to. The butterfly effect was created more to explain different weather patterns and how they came to be, but the overall idea is one that has been adapted to suit pop culture in a number of ways, and it does make a great deal of sense that over time even a small change could eventually enact a lot of bigger changes if the situation was right and things happened in a manner that could be followed back to the one shift in time that might explain them.

But the science of Bill and Ted Face the Music is still in question for a lot of people no matter who is brought in and whose word we’re being asked to take since the idea of people traveling through time at this point is still, as far as anyone knows, well beyond the reach of humanity. The butterfly effect is one explanation that people cling to since it encompasses a wider scope and allows people to widen the net of accountability since if one thing happens that prompts another thing to happen and so on and so forth it might still rest on the shoulders of an individual or a smaller group of people, but eventually more and more will share the responsibility for halting said changes or enacting them. In Bill and Ted though, the butterfly effect is far more serious since without the song they’re meant to play to unite the world, then the world is meant to come to a disastrous end, which feels kind of drastic since this is where we enter the realm of pure fantasy or science fantasy, and it’s likely that even Spiros can’t fully explain this. Plus, even granting everyone an instrument of their own doesn’t exactly mean that a person would know what to do with the instrument, let alone be able to play it with any skill. So when it comes to science and Bill and Ted, it might have been well-researched and it might be realistic, but it still gets drowned out pretty easily.