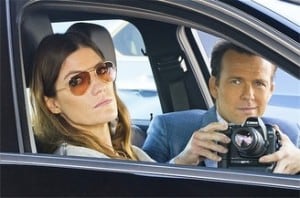 The first two episodes of Dexter‘s final season established a complicated and intriguing question that the series must answer before its end: who really is Dexter Morgan? Despite the relationships that he has formed with his family and friends, has all this really just been Dexter acting in self-interest? Has he only used and abused these bonds and connections to help protect himself whenever the world threatens to harm his perfect little world? These are a few of the points that Dr. Vogel raised in last night’s episode of Dexter, and while “What’s Eating Dexter Morgan?”may not have been as impressive as this season’s first two episodes, it still still had a lot to offer.

The most interesting part of last night’s episode (and I can’t believe I’m actually typing this sentence out) was the character of Quinn. For the past couple of seasons of Dexter, Quinn’s been a major annoyance; sure, every once in a while he could make you laugh, but for the most part, he was there just to take up screen time from Dexter and Deb with his drinking-fueled escapades and romances with strippers. However, last night’s Dexter gave Quinn some much needed depth while also positioning him to be the member of Miami Metro who may finally realize that something just isn’t right about Dexter. Quinn’s concern and care for Deb were touching to see, and after Deb’s boss’s line about how most guys could never be friends with a girl who turned down their proposal, I gained a small layer of respect for Quinn. While the guy can be a total jerk, he’s been primarily selfless in these first couple episodes of season eight, and I hope the good writing for him can continue past this one episode.

Switching over from selflessness to selfishness, Dr. Vogel’s words to Dexter about how his love of other is simply selfish is another interesting idea that the Dexter writers are pushing forward this season. While I could see this idea of self-interest in his relationships with Rita, Lumen, and Hannah, I don’t know if I completely buy into the fact that Dexter has always been selfish with Deb. He kept his secret from her as long as he could in order to prevent the downward spiral that we are seeing from her this season, and in years past, the only things Dexter had to gain from their relationship were what all typical people want from their own relationships: the knowledge of being cared for, confidence in one’s self, and a safe haven that they can to and confide in.

If Dexter truly wanted to protect himself from the threat of Deb, he could have figured out a way to handle her like he did with Hannah, turning her into the authorities, possibly framing her for a crime she didn’t commit, or, as Dr. Vogel had suggested, he could have just killed her. In my opinion (and maybe it’s just the optimist in me), Deb is the only person that Dexter can ever really feel anything for. The two of them grew up together and have always been there for one another, and I think trying to say that now, in Dexter‘s final season, that this has all been some selfish mind game that Dexter has been subconsciously playing would cheapen both of the characters and the relationship that has developed between them over the past seven years.

However, just because Dexter may truly care for Deb does not mean that the two of them will be able to live happily for the rest of their lives. As Dexter says near the end of last night’s episode, “I consume everyone I love.” Those words could be acting as a warning sign for the rest of Dexter‘s season; despite how much Dexter may care for Deb and want to truly help her, he may ultimately be leading to the pair’s mutual destruction. 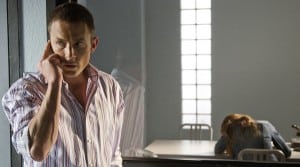 – I still don’t trust Dr. Vogel (and I don’t think we’re supposed to), and I’m really worried about how her treatment of Deb is going to go. However, it should be interesting TV to watch

– Still really enjoyed Deb’s interactions with her boss this week. He has been a great addition to this final season.

– Miami Metro update: Even though Quinn was mostly important in this episode, he still got bogged down in drama with Angel and Jamie. Angel is upset because he doesn’t think Quinn is taking the sergeant test seriously, and Jamie’s pissed because Quinn still cares for and is helping Deb. Sigh. In other news, the randomly introduced African American detective from last season is weirded out by Masuka. Can’t wait to see what happens next with those two!

– Even in its final season, Dexter can still make me laugh so hard with its dark humor. Michael C. Hall’s delivery of the line, “This brain is marinating in some sort of…garlic sauce,” had me roaring with laughter.

– Even though I knew the truth couldn’t come out this early in the season, the scene where Deb confesses to Quinn about killing LaGuerta was still extremely intense. Great job by the writers and performers, specifically Jennifer Carpenter, for really pulling those moments off.

What did everyone else think about last night’s episode of Dexter?