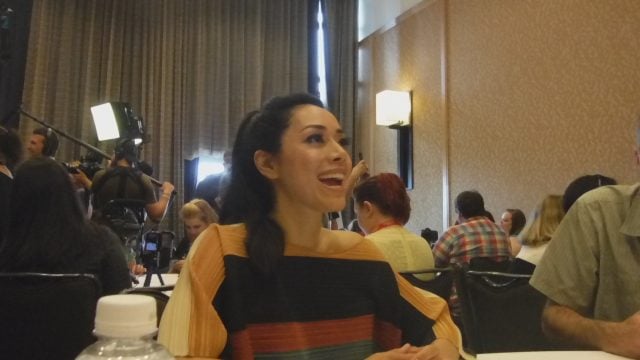 She was all cheer and determination in a very grim world as Jamie Batista on the Showtime series Dexter. As the unsuspecting nanny to a serial killer’s son, Jamie stood her ground despite being surrounded by death. Now she will call a new show home as forensic scientist Ella Lopez on Lucifer. “She brings light to this in the same way that Jamie brought light to Dexter” says Garcia of her new role. Described as a contradictory woman of faith and science, Ella will shake up the title devil’s view on human nature as he continues to explore what it means to live among them.

Ella’s presence shakes up Lucifer quite a bit. Executive Producer Joe Henderson recognizes that there is a divide in the characters where the humans question the concepts of heaven and hell while they are unknowingly living amongst angels and demons. “Lucifer thinks atheists are idiots. We kind of confirm the idea of faith”, says Henderson, and you can bet Garcia’s character plays a part in that. “Lucifer’s completely intrigued by her because she is a woman of faith and is not confused by God. Whereas Lucifer is completely confused by God,” says Garcia of Lucifer’s interaction with Ella. Don’t think that that means Lucifer is going to be as fond of Ella as he is of Chloe. Whereas Chloe is all about boundaries, Ella has no boundaries. “She has no sense of space with him. She’s constantly invading his space…calling him ‘Luc’, and then he gives her a look and she’s like ‘-ifer’. She’s completely fearless”.

As for her character’s relationships with the rest of the characters, Ella is multi-faceted enough to create lasting bonds with everyone. She’ll have a childish side which connects her to Lucifer and Trixie, and an intellectual side which will earn her respect from people like Chloe.

Of her Dexter days Garcia remembers fondly the environment her former castmates created. “Everyone on Dexter…created an environment where you’re allowed to take risks and play, and try things, and not be all self-conscious and guarded.” Garcia didn’t necessarily think that she would find that kind of environment again, but it seems she has, particularly with the girls on the cast. “This is the kind of female to female support that I am so giddy about.”

Click below to see Garcia’s entire interview with TVOvermind. Tune in to see Garcia in her new role when Lucifer returns this fall.