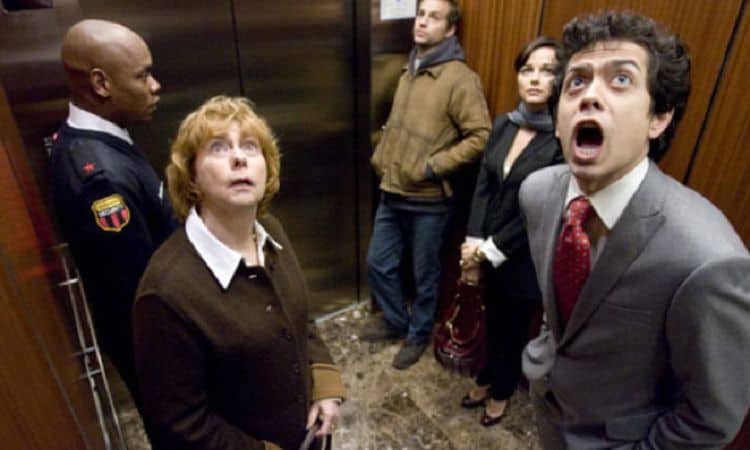 Out of the several movies that M. Night Shyamalan has been responsible for, Devil is one of those that had a chance to move beyond the confines, literally and metaphorically, to create a story that was bound to be thought of as masterful and mind-bending. But while Shyamalan has often been seen to have insane and gut-wrenching twists in his movies, this one kind of missed the mark. Thankfully that’s not a condemnation of the movie, simply an observation that he was on the right path, but somehow limited himself to what could have been done thanks to the supernatural lean of this movie. What was fun about this movie is that the majority of it took place in a very confined space, as the elevator car that carried the five characters that became a main part of the focus was difficult to think of as a great setting. But if one takes a closer look at how terrifying an elevator can be, and how many people start breathing heavily when they step into the lift, they might realize that there’s far more that can be done with such a mundane space than one might realize.

The story had to venture outside of the lift to make certain that there was another vantage point or two that could be used as anchors to keep the story grounded just enough. But thinking of the movie Poltergeist 3 and how the mirrors were used to such a great extent, it feels as though Devil might have been able to tap into that kind of element to heighten the supernatural feel while keeping things a little more realistic. Pushing the envelope in a movie such as this feels like it would be a good idea since the plot and the subject material made it possible to explore the mythology behind the idea in greater depth.

Getting into the story takes a little bit of effort since it can’t be claimed that nothing happens right away, since a guy does commit suicide, but from that point on things take a while to build up again as the five individuals that enter the elevator car don’t appear to be any different from anyone else off the street. But as things move along and the elevator predictably gets stuck, the tension begins to build fairly quickly as the people in the elevator obviously don’t trust each other, even if this feels a little too contrived. Still, the terror is enough to mask this in a way since the fact that there’s a vibe that something isn’t right, especially when a demonic-looking face appears on the surveillance camera that’s being watched by two security guards and, eventually, the detective that is placed on the case. The only person that thinks anything of this is one of the security guards, but as one would imagine, he’s not listened to since his words are taken as useless rambling. When the weirdness starts and the younger woman in the elevator is somehow bitten, the individuals start turning on each other as one of the men is the first to go as the breaking of the mirror in the back wall of the elevator heralds the death of one of the men as he’s found with a sharp impaling his throat.

Eventually, the security guard in the elevator is found with his head twisted around on his neck, the older woman is hung by light cables, and the final two, the younger woman who was bitten and the unknown individual that turns out to be an ex-soldier, are left holding each other at bay with shards of glass. When the lights go off again, they come back on to reveal that the ex-soldier is holding the woman, whose throat has been slashed. It’s at that moment that the older woman is revealed to be the devilish spirit that had plagued the individuals, and as the ex-soldier confesses to a hit and run that he committed years before, the detective listening in, who lost his family to a hit and run driver, realizes that this is the same man. In short, every person on the elevator had committed a serious sin, and the devil had come to collect.

The creepy nature of this movie is a good start to something that could have been insanely terrifying had it pushed things even further by using the supernatural element to create optical illusions and visions that could have taken the story out of the elevator while keeping them in focus by snapping back to the lift after every vision. It could have easily gone way too far and been too much, but as it stands, Devil is a terrifying movie, but it could have used a few more needed touches that would have elevated the movie even further. M. Night Shyamalan knows to build suspense, but sometimes his stories tend to shy away from hitting that sweet spot between too much and not enough when it comes to the intensity of a story.