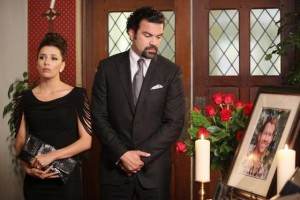 If you didn’t get at least a little teary at the end of last week’s Desperate Housewives, then I question your ability to react to things emotionally. Mike Delfino’s death may not have been a shock, but it was still a pretty upsetting moment — especially for a show that tends to be light hearted more often than not.

Tonight’s episode was a moving and emotional hour full of flashbacks (and fun character returns), starting with Mary Alice talking about problems around the neighborhood. Of course, we soon delve into the ladies finding out about Mike’s death and our first scene is a somber moment of Susan picking out headstones, coffins and clothes for Mike’s funeral. Elsewhere, Fairview PD act on their tip letter from Orson and dig up Alejandro’s body.

Gabrielle and Carlos reminisce about Mike, while Gabrielle expresses that she still doesn’t understand Carlos’decision to switch jobs. Julie, meanwhile, is trying to help a depressed Susan choose a dress when the Reverend comes by to give her a draft of what he plans to read at the service. He asks if Susan is planning on saying something, but Susan, clearly upset, doesn’t know if she can.

As for the other housewives, Lynette breaks down to Tom upon realizing that Mike is really gone (it was nice to see that Tom could still be there for Lynette despite everything that’s gone on this season) and Renee tells Bree she’s not going to the funeral because she still feels guilty for being the unofficial cause of Mike’s death. Bree convinces her to show up and just as she’s about to head off, a detective from the Fairview PD comes by and tells her that she needs to answer a few questions.

As Mike’s funeral progresses, each housewife undergoes a series of memories ranging from the beginning of their time on Wisteria Lane to more recent moments, most of which include Mike in some way. Gabrielle remembers shopping for her wedding dress with Carlos’mother where she overhears Carlos talking about how much he loves her, despite how hard he has to work to keep her happy. In another flashback, we see Carlos being difficult about not helping Gabrielle take care of a sick Juanita and Celia because of his hectic work schedule, and in a more recent flashback, we see Mike coming over to talk with Carlos about his stint in rehab. When Gabrielle admits to Mike that she’s upset because Carlos won’t talk to her, Mike tells her that he’s afraid she might leave because he’s no longer able to provide for her in the way that he’s been used to. Gabrielle remembers how Carlos pledged to be there for her no matter what, and then tells him he should quit his job if it’s what’s going to make him happy. 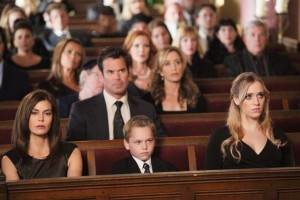 Lynette, prompted by some wedding pictures of Susan and Mike, remembers beginnings of her own marriage (I have to admit, I laughed at the flashback wigs – especially Tom’s.) We see Lynette’s workaholic, controlling personality come out as she tells Tom no one can tie her down, and then some years later we see Tom buying a pregnant Lynette her dream house. In another flashback, Mike is helping Lynette move Tom’s stuff out of the house and he offers his advice on the situation, saying that someone has to make the first move even if they’re angry — because otherwise it’ll be too late. When Mrs. McCluskey comes by at the funeral to sympathize with Lynette about Tom and Jane, Lynette tells her she’s going to do something about their relationship — before it’s too late.

Bree’s flashback is slightly different, as it doesn’t involve Mike at all. As she sits in the Fairview PD waiting to be questioned, she thinks back to how she’s dealt with ‘powerful men’and tense situations (apparently, childhood life lessons from Mrs. Van De Kamp include learning how to wear a mask, how to conceal what you’re feeling, and how to be a woman — also, how to cook.) In another flashback, we see Rex trying to call Bree out on the fact that she’s angry, despite the fact her ‘plastic face.’Bree attempts to remove her mask, opening up to Rex about her jealousy concerning his comments to Gabrielle, but instead of sympathizing, Rex blows off her feelings as selfish and stupid. Back at the police station, Bree is questioned about Alejandro. Since Orson’s letter implicates Bree as the killer, she’s asked straight out if she’s responsible — and though Bree’s ’emotionless’face gets her through the questioning session just fine, we later learn that the police have obtained her prints (through the coffee cup she used during her interrogation) which they plan to run against the prints found on Alejandro’s body.

As Susan sits at the funeral and tries to figure out what to say about Mike, she flashes back to the night of their wedding, and then to the day she put together her will while pregnant with MJ. In a more recent flashback, a diner lunch with Mike and MJ finds MJ asking about death after hearing about the death of Chuck. When Susan fails to accurately assuage MJ’s questions about heaven, Mike smoothly fixes the situation, telling MJ heaven is the happiest place on earth. Susan decides to make a last minute speech, where she uses Mike’s explanation from the diner to talk about how he’s now in the happiest place he can be. 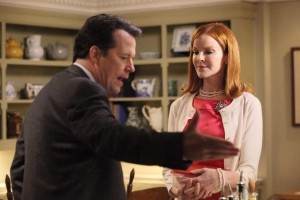 As Renee sings an emotional rendition of ‘Amazing Grace,’we watch the remaining moments of Mike’s funeral — the husbands carrying the coffin out of the church, the funeral procession, and the girls at the gravesite. Maybe it was Vanessa William’s voice, or maybe it’s just because for as many deaths as we’ve had on this show, we’ve never had one that’s felt so emotionally drawn out before – but I have to admit I was more emotional than I expected.

Following the funeral, the girls return to Susan’s house and as she breaks down about her current alone status, the girls promise to help out as much as they can. Mary Alice reminds us that as much as death takes away, it also helps make us a better person and it’s no question that throughout the episode, all of the ladies were certainly reminded of what a good person Mike was — and how he helped shape their lives.
As the episode closes, we see the Fairview Police finding a match between Bree’s prints and the prints on Alejandro’s body. There’s talk about wanting to get Bree locked up for good — but I can’t imagine that the show is really going to end with one housewife in jail. Any thoughts on how the remaining hours of Desperate Housewives are going to play out?

What did you think of the episode? Did you think it was a fitting send-off for Mike Delfino?