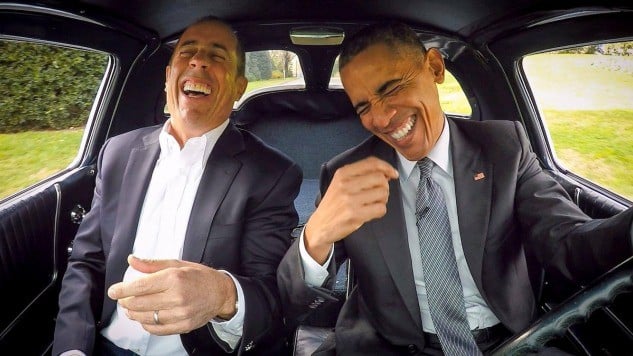 While Jerry Seinfeld’s new series, Comedians in Cars Getting Coffee first aired in 2012, it hadn’t gathered much widespread attention until it landed on Netflix earlier this month. Its premise is straightforward: Jerry Seinfeld drives around in vintage automobile with a fellow comedian (or a non-comedian that he admires), and they go to a local coffeehouse or diner and wax over any number of minutia. Most episodes don’t break 20 minutes. It hardly sounds like the formula for a hit show, but Jerry Seinfeld has hardly had a formulaic career path.

After hitting it big with maybe the most surprising hit of all time, Jerry declined the obvious choice for a tenth season and took it easy. He had a few cameos as himself in various sitcoms, wrote a few shorts, and made one delightfully bizarre animated film. If he had any aspirations of reclaiming the fame of Seinfeld, his workload hasn’t let on. But in its own special way, Comedians in Cars Getting Coffee reclaims a lot of the charm of the Show About Nothing. The cafÃ©s might cater to a  hipper demographic, but many of the conversations have the same sort of feel of the classic scenes at Monk’s.

Most of the conversations start off with a focus on their careers, but they quickly devolve into a dissection of various topics. The topics are more relevant to a modern audience, but they are subjected to the same minutia as classic conversations from the sitcom. He discusses gender identity, medical marijuana, civet coffee, which football is more popular, and whatever other randomness happens to come up. Most of the episodes are marked with Jerry’s trademark irreverence, which has a varying effect based on his guests–Christoph Waltz barely seems amused (but that might be the IHOP).

But occasionally, Jerry lets his humanity slip out. He shares a startlingly honest moment with his beleaguered former co-star Michael Richards. The Trevor Noah episode is so touching that I watched it twice in a row. Jim Carrey brings a disarming earnestness that is unexpected from either one of them. His episode with Julia Louis-Dreyfus is basically a string of “do you remember when”s that beats any official behind the scenes featurette.

The chemistry between Jerry and his guest is sometimes hit or miss (again, Christoph Waltz), but most episodes are awash with contagious laughter and mutual admiration. It’s frequently funny, sometimes touching, and always charming. And if that’s what Jerry Seinfeld wants to give us now, that’s enough.