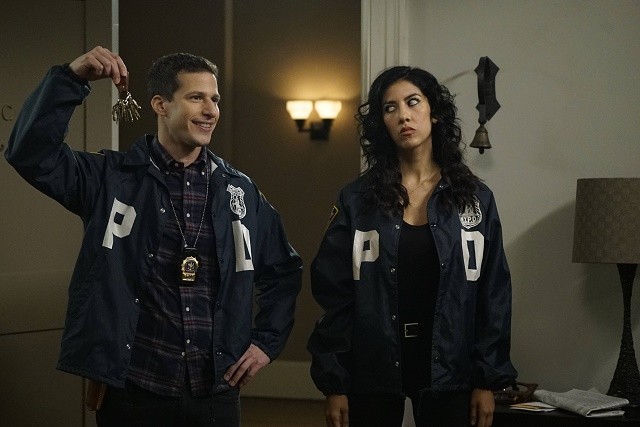 Over the seasons, Brooklyn Nine-Nine has made an effort to establish real and believable friendships between all the members of the Nine-Nine. In doing so, the writers have created a show full of interesting and rewarding dynamics, with every single episode delivering some kind of payoff for the different relationships. In last night’s episode, the series explored the rarely seen dynamic between Boyle and Holt while also showing once again that the team has each other’s back, as Amy and Terry helped Gina study for an exam. The true purpose of last night’s episode, however, was to question if all of these relationships are truly friendships outside of the work place.

It’s always a delight to watch Holt and Boyle interact, and last night was no different. Holt came to Boyle asking him to be his partner in racket ball when he learned his husband would be out of town for the final tournament. The two had taken first place the past two years, and Holt was relying on Boyle to help win them another first place finish. Due to past incidents, Boyle was hesitant to say yes, but because of his desire to get more face time with Holt, he agreed, despite his reservations.

We saw a whole new side of Boyle in this episode, a competitive beast who would stop at nothing to win. While he tried to hide the beast inside of him at first, not wanting Holt to react negatively to his competitiveness, he quickly came to realize that Holt wanted to win just as much. In fact, Holt embraced and encouraged Boyle’s true self, as the two went on to win the tournament. But of course, not without being disqualified from all future tournaments thanks to Boyle breaking the second place trophy. Watching these two very different men bond over a shared interest and shared personality trait was a lot of fun, and hopefully, we’ll get to see them team up more in the future.

While Boyle helped Holt win the first place trophy, Terry and Amy were helping Gina study for her astronomy test. Frankly, I had completely forgotten that Gina was taking classes on the side, as it’s something they don’t mention often in the show. But that doesn’t take away from how glad I was to see this featured in last night’s episode, with this storyline offering some great comedy moments for all involved. From Amy’s mnemonic device to remember all of Jupiter’s moons, to her and Terry’s dance in attempt to get Gina to understand the subject, there were plenty of laugh-out-loud moments.

The core of last night’s episode didn’t center around racket ball or astronomy, though. Instead, the focus was on Jake and Rosa’s friendship and whether or not it truly could be considered a friendship. When they were forced to work a case with another team from Sweden, they were confronted with a partnership much different from their own. This other pair knew every single detail about each other’s personal lives, from allergies to attempts at becoming pregnant. Jake, on the other hand, didn’t even know that Rosa had broken up with Marcus the previous month.

While Rosa saw no problem with her relationship with Jake, knowing that they work well together and considering them friends, Jake started questioning this friendship when he realized how little they knew about each other’s personal lives. This created an interesting and never before acknowledged conflict that the two worked to resolve as they simultaneously worked to solve the case. In the end, they both realized that they did not need to constantly be holding hands or keeping each other up-to-date on their personal lives to be successful work partners and friends. In fact, the relationship between the Swedish partners led to worse results in the field than Jake and Rosa’s way of doing things.

Just as Jake was willing to accept that they didn’t need to know everything about each other to be friends, Rosa attempted something she’s never been very comfortable with: sharing. After the case was solved, she sat down with Jake at the bar and offered him some relationship advice about what to give Amy for their six month anniversary and even opened up to Jake about her own personal life (after downing four shots), telling him the name of her new boyfriend. Since she’s a character who is rarely open, it’s always very rewarding to peel off more lawyers of Rosa’s as she opens up to different characters, each step of the way letting them and us get to know her a little more. Brooklyn Nine-Nine does a fantastic job with subtle moments like this, gradually developing its characters in realistic and captivating ways. At the end of the day, all of these characters are good friends, and it’s because Brooklyn Nine-Nine has done such a good job establishing this that we’re rewarded with so many great moments.