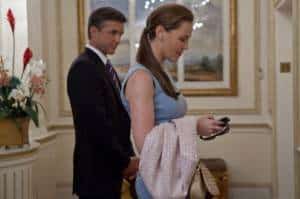 To put it bluntly, Boss‘s Mayor Tom Kane is an ass. Facing heat from a possible impeachment attempt and a whole lot of backroom dealing from those closest to him, Kane threw his estranged daughter under the bus as a distraction for the press. By busting Emma’s clinic (and Emma herself) under drug charges, Kane bought a few extra days of time until after the election is over, but he alienated one of the last people on his side in the process.

However, as alienated as he may be, Kane gained something from the move: power, the one thing every character on Boss has been chasing all season. And with his newfound upper hand, Kane is on the war path, chest puffed out and ready to make his team prove their loyalty to him once and for all. (Including Meredith, who had previously been trying to swill support for a Kane impeachment.) Likely, said tests of faith will be at another’s expense, so look for Kane to wield his henchmen like ginsu knives.

One of the major themes of Boss is that the American political system has the ability to change/corrupt even the most staunchly moral individual and in no other character is that more evident than Mrs. Maggie Zajac. Until last week, Maggie was looked at as the naive, put-upon wife of young dynamo Ben, but once her husband’s sloppy extramarital affairs came to light, Maggie turned into a shark more concerned with public image than her marriage. In the second clip below, she’s the one calling the shots, urging Ben to stick this out and utilize his talents to pull out what is likely to be a close finish.

The season finale of Boss airs tonight at 10:00 on Starz. You can check out the second season when it premieres in 2012.

Who do you think will win the election: Cullen or Zajac? How much collateral damage will there be along the way? Where should season two of Boss go?