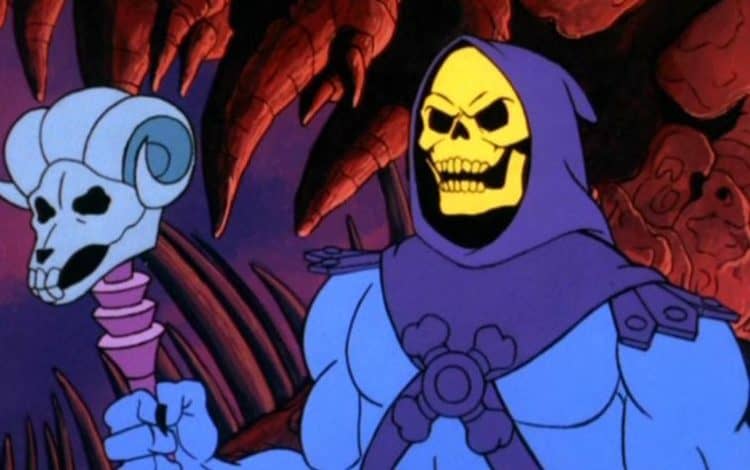 First of all I need to say thanks to Sean Fagan and Jack Shepherd from Buzzfeed for reminding us just how awesome Skeletor really is since as kids we probably didn’t really appreciate some of the quotes below. It’s been too long and it’s too easy to forget that as an evil tyrant and boss of so many henchmen that this guy was someone special in our childhood no matter that he was supposed to be pure evil and proud of it. Rich McCormick is another individual that thankfully reminds us just how terrible he really was to people in the cartoon since, hey, that’s his job. He’s the kind of evil boss that you know would send you to the pits of hell for bothering him on a bad day or would threaten to skin you alive and use what was left to paint the walls while thinking up another way to capture the ever-elusive Castle GreySkull and defeat He-Man. Skeletor was not a nice guy and he was proud of it and looking back that’s nothing short of awesome. He was the kind of bad guy that never really succeeded but at the same time was so horribly evil that he reveled in every act he committed against the forces of good. Even Rob Bricken from io9 tends to agree that Skeletor is the kind of boss you studiously avoid unless you want your face rearranged, literally.

Here are some of the best quotes that have ever crossed Skeletor’s yellowed teeth, which is amazing since speaking without lips or a visible tongue only makes him more badass.

10. I must possess all, or I possess nothing.

Come on, we’ve all had those days where it’s all or nothing and it’s bound to be disastrous if it happens to be the latter. Skeletor had one day after another like this and had to get by on virtually nothing at all when it came to the win/loss department.

When at first you don’t succeed…lie, cheat, and steal your way to glory, right? That was Skeletor’s idea at least and like many bad guys he found out that the heroes somehow managed to fight back and even anticipated him sometimes, no matter how good he got at cheating. Of course it usually seemed to be because he hired substandard henchmen.

8. You furry, flea-bitten fool, I’ll cover my throne with your hide!

Now there’s an image you don’t need in your head, right? Just think of it, a naked Beast Man roaming the countryside trying to find some way to make the meager armor he wore cover the parts of him that used to be covered in fur. Yeah, that shudder you felt is probably real.

7. Everything comes to he who waits… and I have waited so very long for this moment.

You can almost feel sorry for the guy when you imagine how many times he must have had to say this as a character and how many times it sounded like the record of his life had skipped a track and started over.

There are a lot of days that a lot of us might feel like this since the world doesn’t seem willing to give us what we need or what we want and we have to taste the bitter defeat that few if any people really like. So yeah, there are those days when this is the call of the frustrated.

5. Books are the real treasures of the world!

Yes, Skeletor actually said this….it’s a total mind trip, I know. But a bad guy actually valued something that makes sense and is equally as valued by the good guys. Just take that in for a moment and take a deep breath.

It seems fair to say that we’ve all had bosses that have said this or something like it, right? The types that ask you to do what they said while disregarding what they said are the truly confusing bosses that make absolutely no sense, but somehow people still stick around.

3. How unpleasant it is to see you, you sniveling coward!

This seems like it would be gladly reserved for those that tried to weasel their way out of work only to be caught in a lie and forced to come in or accept the loss of pay or their job.

Sometimes it’s actually best to look to one’s own efforts when you really want something done.

1. I am the Alpha and the Omega. Death and rebirth. And, as you I die, so will I be reborn.

Ever notice how the bigger the boast, the more losses the villains tend to take? Seriously, some of the greatest villains throughout time have made the biggest and most emboldened claims and they’ve been smacked down more times than people care to count.

Ah Skeletor, how we’ve missed you.