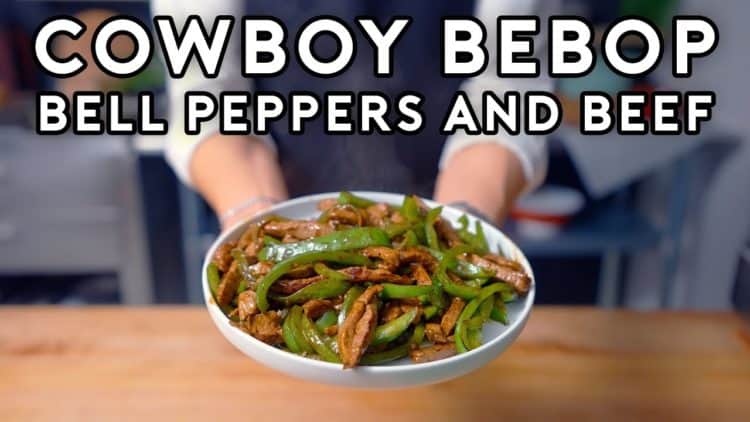 Binging with Babish is always a lot of fun to watch, but this week we get to see what Alvin can do and to be fair, he does a pretty good job in putting together a dish from Cowboy Bebop in three different ways. It’s fair to think that a lot of folks would deny that beef and peppers could be applied as a title to at least one of these dishes, but let’s agree to disagree since mushrooms can be meaty if you pick the right types and can give a nice chew if there’s enough to them. You don’t need to be a fan of Cowboy Bebop to understand this dish since one thing about stir fry of any sort is that it’s as simple or as complicated as you want to make it. To be fair, the ingredients are usually simple to find if you can find a place to obtain the ingredients. Then all you need is something to cook with and an understanding of how to put stuff together. Okay, there’s more to it than that, since being able to understand how to cook is a good idea. But in terms of cooking this has to be one of the easier dishes to put together.

Alvin makes the process look easy and even kind of fun to be realistic, which is easy to be jealous of since watching someone that’s good at their craft does create a bit of jealousy among a lot of people. Why is that? Well, that’s pretty simple. A lot of folks want to be able to do whatever they see others doing, they want to have what others have, and so on. I know I’m not alone when it comes to wishing that cooking was this simple since the joy that a person can get from cooking is easy to feel if a person lets themselves do so. Wok cooking is interesting since it’s different enough that one needs to kind of bone up on what it’s about and how it differs from cooking in other pans.

Many people can look at a kitchen full of pots and pans and utensils, as well as any other needed implements, and smile with joy as they try to decide what they want to make. Others might see a torture chamber since they don’t like cooking, and some of us might look at a lot of this stuff with silent wonder as we try to tell ourselves that we can do something, we just don’t know what. Alvin has the kind of showmanship that makes it easy to say that he’s right where he needs to be and has a lot of promise. How long he’s been at this is hard to say, but it’s kind of obvious that he knows what he’s doing and even knows a good deal about the dishes that he’s making. To be serious, it would be great to see more of him on this show if he’s wanting to do so. It’d be great to see what he might do with a more complicated dish and what kind of cooking tips he could give at the same time.

One great thing about these cooking shows is that despite looking like it’s easy all the time, which it probably is if one follows the instructions and doesn’t deviate too much, is that a lot of people can cook, and each show is doing its best to indicate that people should cook their own meals. Relying on fast food and other foodservice isn’t inherently bad since quite a few folks do so since they lead busy lives that don’t allow for the joy of cooking all the time. But watching these cooking shows over and over makes it feel as though the time spent on some meals isn’t quite that long since one can see that throwing a few things together might only take a few minutes. Some dishes take a lot longer to be fair since the time needed to let things settle or rise or otherwise do their own thing is bound to be a little daunting for some folks. But all in all, cooking is a joy that a lot of folks should be able to do.

In any case, Alvin does a great job in this clip and he makes a person feel that throwing together a bit of stir fry shouldn’t be that difficult, which it isn’t, and that it shouldn’t take that long, which it doesn’t. Plus, I don’t know about you, but I’m actually tempted to try these recipes now that I’ve seen them being laid out, even the spicy ones that might be a little too much for those that aren’t into that much spice. Hey, you only live once, you might as well enjoy it.