Home
Television
Binging with Babish: King of the Hill Special 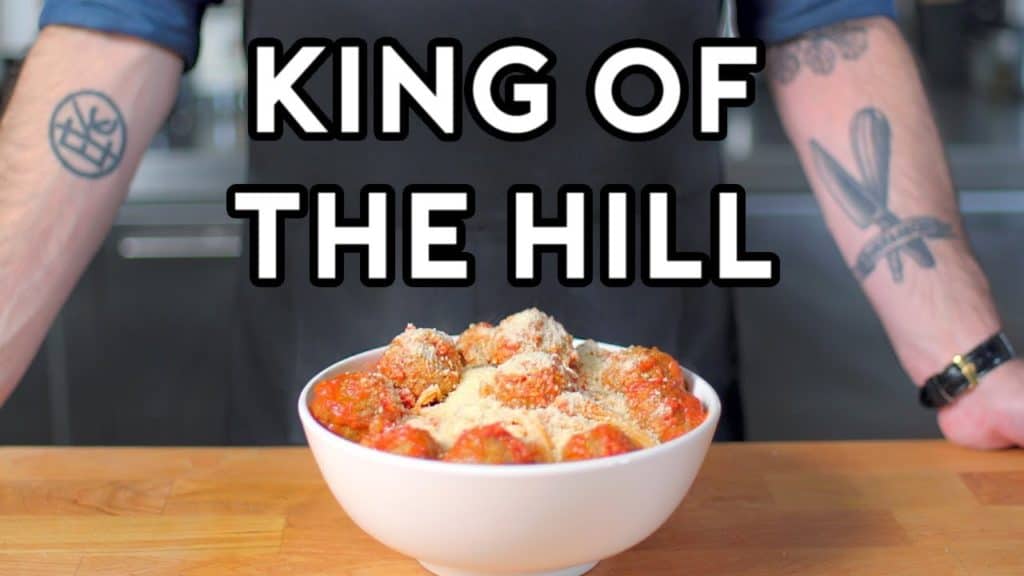 There are a few characters in pop culture that are truly annoying, but a lot of them do have a use within their shows or movies, which is hard to admit at times but not hard at all to understand. Peggy Hill is one of those that some people like and some people can’t stand since she’s one of the most stubborn and prideful characters on King of the Hill and unlike many of them, she is so set and determined in her ways that she’s unable to admit when she’s wrong. There are those who would say that she’s confident and a positive, forward-thinker, but the truth is that Peggy Hill is more or less a mule-headed individual that is so convinced of her superiority that she doesn’t and won’t hear anything else that people say no matter what they’re talking about. When it comes to cooking and baking, Peggy is the type of woman who will be offended if anyone decides to make the same dish and consider it superior. That’s why the dishes that Babish took on for this clip are kind of humorous since pretty much anyone could make them.

A take on a chili Frito pie, a bowl of spaghetti, and a baked brown betty is simple enough since quite honestly they’re not complicated dishes if they’re made using the easy-to-find materials that can be found in any supermarket. None of these dishes are particularly difficult, and this is coming from a guy that can’t cook more than a few dishes without a recipe right in front of him. Babish on the other hand is the kind of guy that is bound to be able to take some of the finest materials and make a dish that might actually make Peggy shut down for a few days. That, or she would lift her chin and set her ‘denial’ knob to its highest setting in order to get through her day.

It’s amusing really to think that there was a time when a lot of us didn’t know how to boil water, much less make something like a meatball or a red sauce or a sweet treat that requires at least enough mindfulness to make sure that it’s assembled in a way that would make it taste the way it should. Babish makes everything look insanely easy, but it’s easy to see that he’s a man that loves his craft and is maybe just a little bit uppity at times simply due to the fact that he does know what he’s doing and he does take pride in working with some of the finest materials. People expect folks like Babish to know what they’re talking about, but they like being entertained as well, and Babish is able to do this each and every show he puts on, and he’s made a good living at it. Ever since finding him online, it’s been fun to watch every clip that could be found since Babish does have a great sense of humor and a superior skill set that when pitted against others might actually be even more impressive than many others. But the culinary world is one where a lot of people have excelled, and it’s fair to think that a lot of people still don’t know who Babish is.

There’s nothing wrong with that to be fair since the internet is a wide place and it’s easy to miss a lot of what other people might notice while in pursuit of other things. But Babish is one of the best channels to have found in the long and storied search of entertainment. He’s been around for less time than many others that have sought and found their fame on the small screen and online, but watching him operate it’s fair to state that his skill is on par with a lot of chefs out there, especially since he has worked alongside an Iron Chef in the past. Some of the clips that he pulls out tend to appear kind of complicated and definitely well beyond anyone that can’t boil an egg, but the wonderful thing about cooking is that it’s not hard to learn so long as a person pays attention.

As far as King of the Hill and Peggy Hill goes, the belief is that someone like Peggy Hill would accept that others could make the same dishes that she feels are hers and hers alone is pretty strong. But the truth of such people as Peggy is that she would smile and offer backhanded comments and make it appear that her dish was superior because of one thing or another. She would be simmering inside at the very thought that someone else could assume that they might be able to match her middling culinary skills. One would just need to sigh and let it go.