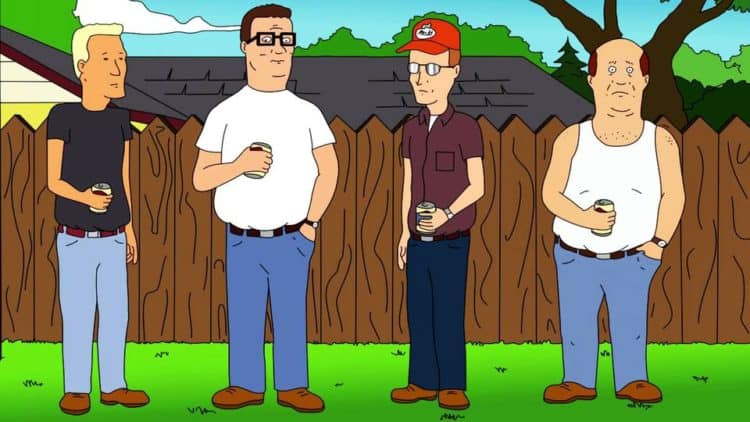 The moment that a lot of folks realize why King of the Hill lost its spot on TV they might roll their eyes and wonder how in the heck anyone thought that such a thing could happen when this show was comedy gold and was also one of the best animated sitcoms on the air at that time. It’s been a while since the show’s been gone, but at the same time, there are a lot of people that would love to see it come back somehow and possibly experience a time jump to see how everyone has turned out. But the reason why it left in the first place wasn’t just that the ratings were starting to dip. Instead, it was taken off to make room for The Cleveland Show, the spinoff from Family Guy that was thought to be such a great idea. The Cleveland show lasted for about four anemic seasons and hasn’t really left that much of a memory behind, but almost anyone and everyone that’s ever watched King of the Hill remember this show fondly since it not only made fun of a great number of subjects and situations, it was also genuinely funny since it was more attached to real life than any other animated sitcom that’s come along in the last several decades. Thinking that it was pushed out by The Cleveland Show of all things is kind of sad really since at the time it’s fair to say that the producers of the spinoff didn’t know that it wouldn’t create that much hype, but thinking that it would surpass a show that had already reached 12 seasons and was still going quite strong was a serious misstep.

Cleveland was a fun character on Family Guy, there’s no doubt about that since he added another level of humor that was needed and definitely spiced things up a little with a more diverse cast. But apart from that, Cleveland was created and thrived more as a supporting character than anything. It feels that had he been created in a different manner or had his story gone in a different direction that things might have worked out, but it still might have come up short against an established show such as King of the Hill. It’s definitely a continued point of confusion when looking at how shows are shuffled around and replaced from time to time since the decisions that are made are quite often hard to understand or get behind. When taking down some of the best shows in order to bring in new material the hope is that whatever is coming in will be just as good if not better than what was already there. In all fairness, what’s considered ‘good’ is usually a matter of perspective since if one needs an example, Borat is considered insanely funny to many people while to others it’s sheer stupidity on parade. The same can be said for a lot of movies and TV shows since everyone has a different sense of humor and one person might laugh while another person might remain stonefaced or even look on in a disgusted fashion. But in this instance, it does feel that the wrong decision was made since King of the Hill was experiencing a dip in ratings, but not enough to warrant pulling it completely and filling the time slot with something that was definitely not of the same caliber.

That’s show business unfortunately since it’s bound to happen that the shows we love will one day dry up and have to move on and shows that aren’t all that great will be brought in to replace them. Eventually people get used to the shows that are brought in and start thing of them as great, meaning that they’ll invest in them a bit more until they happen to think that said shows are great, largely because there’s nothing else that they want to watch. That’s a bit of an oversimplification really, but the point is that once one loses a show that they really like, which is inevitable since TV networks follow the trends just as much as anyone does and tend to adjust their schedule accordingly. But one has to wonder why the trend is to get rid of something that people genuinely like to gamble on something that’s not proven outside of the show that made it possible. The best thing to say in this situation is ‘oh well’ since the TV networks are going to do what they think is wise and will follow the almighty dollar even when they appear to be chasing a phantom profit instead of something that’s proven and reliable. That’s kind of the way things go though, and until someone gets it through the heads of the executives, that’s how it will continue to be.