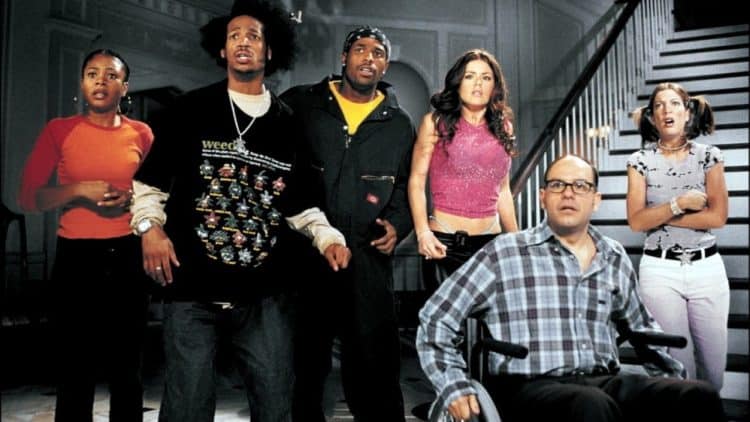 If anyone doesn’t remember Marlon Wayans was on In Living Color for a while where he joined his brothers and sister to deliver sketch comedy that was nice and raunchy during its heyday and was still considered to be one of the funniest shows ever. When he moved on however he started trying his hand in movies and in other TV shows that weren’t entirely successful but still managed to get him a bit of attention here and there. When he really started hitting it big though was when he and his brothers Shaun and Keenan started doing spoof movies making fun of other movie genres that had been taking place for years. As a comical character in these types of movies he developed a big name for himself, in fact you can almost state that he surpassed his brothers for a moment since a lot of people might think that Keenan, Shaun, and Damon kind of faded off for a while while still holding onto a small scrap of fame here and there. Marlon hasn’t exactly been an Oscar-winning performer but he’s been highly enjoyable for his comedic performances, where he seems to excel.

Somehow this movie got to be popular and even successful despite the fact that it does, in a big way, depict white women as deceitful, spoiled, stuck-up, and so completely brainless that one has to wonder at times if it’s really just satire or a strong point of view. Of course it’s simply comedy though since Marlon and Shaun went all out trying to make the gags as hilarious as possible and succeeded for the most part. The movie has been rumored to have a sequel coming and to be honest it seems like a horrible idea, but people are still willing to enjoy the first movie so all seems well so long as it’s the only one.

4. Requiem for a Dream

This movie is all kinds of messed up and it’s hard to know just who came out the best in the end since each one of the main characters is essentially a prisoner in their own right. Tyrone, the character played by Marlon, is likely stuck somewhere in the middle of this spectrum since after being taken into custody as a drug dealer and user he at least has a place to stay, but he’s also forced to through withdrawals while being forced to do manual labor. You could say that he gets the best and worst of both sides of the spectrum since he gets to rest when it’s all said and done, but is still stuck in his own personal hell.

3. Don’t Be a Menace to South Central While Drinking Your Juice in the Hood

In terms of spoof movies this one is nothing short of insane and funny at the same time since it takes the stereotypes and the positive and negative tropes and mashes them all together in one giant ‘message’ of a movie. Loc Dog is kind of like the product of O Dog from Menace II Society and Doughboy from Boyz N the Hood since he’s nuttier than a fruitcake but ready to do violence on anyone at the drop of a hat. Yeah, the USSR missile in the back of his mail truck (thanks Poetic Justice) is a bit much, but that’s the whole point. The Wayans really went all out on this movie and weren’t shy about what they were going to display, thank goodness.

Daryl is that guy that tries as hard as he can but somehow gets knocked down a few pegs by the fact that he doesn’t have much to his name and his reputation for being a hard worker gets overlooked by the fact that his competition has a very impressive pedigree. All that aside however he does gain an advantage when he takes an experimental drug that enhances his five senses. The only problem is that he eventually takes too much and has to deal with the fact that while four senses are working, one of them goes kind of kooky. Having super senses might be great and all, but it doesn’t seem that splendid when you have to do without one that you obviously need.

You might wonder why I didn’t include the first Scary Movie since it really introduced a few of the main characters, but this one was just too good to pass up. These movies took from several different horror movies for their material, but this scene was great since if those who were around back in the day can remember, Nike was king of the commercials for a while when this dribbling sequence came out. Apart from that though, this movie was even funnier than the first one, and I’ll gladly stand by that claim.

Marlon is definitely one of the funnier Wayans, and that’s saying something.