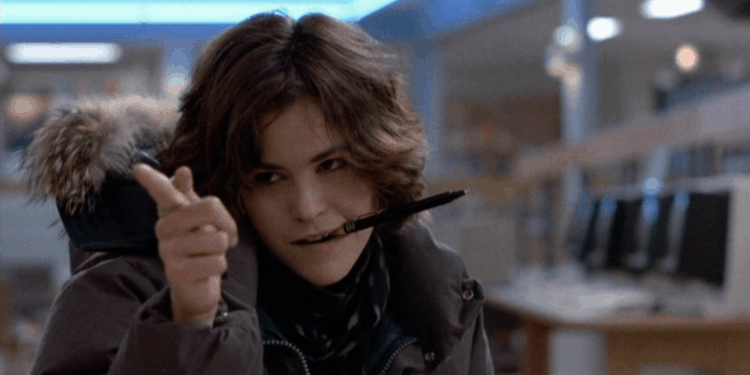 As part of the Brat Pack, Ally Sheedy came to fame when she was still pretty young and remained there for a while as she kept showing up in one movie after another and then eventually in TV shows and on TV movies. Her career seemed to wane after she started to get older but the great thing is that a lot of us that remember her from the 80s and 90s are likely to remember her still since she did play several memorable characters and was a part of one of the greatest high school movies ever made. It’s an opinion of course but The Breakfast Club, despite all attempts by those trying to tear it down for the questionable material, is still one of the most celebrated movies of all time in the minds of fans, and among those that have helped propel Ally Sheedy into movie fame and legendary status.

Animal cruelty is a big deal and experimentation can be seen as insanely cruel, but when a reporter goes looking for a story and accidentally lets out one of the deadliest specimens ever created things have a way of popping off and becoming over the top terrifying. Now granted, this movie was kind of odd and a little corny at times, but all the same it was terrifying as well since if you can imagine a Rottweiler being genetically manipulated and given the traits of several other deadly animals then you might know that taking such a dog into your home would be one of the worst decisions you could ever make.

It’s amazing what happens when you grow up a little bit and find that your interests and your life change since quite honestly you almost expect things to stay the way you enjoyed them for so long. But when a group of friends realizes that life is going to change in a big way whether they like it or not you can imagine that it creates a host of problems and issues that need to be addressed and dealt with, and getting through one only means that you have to move onto the next one and figure that out. By the end of the movie things are looking up again, but you can imagine that things won’t be the same ever again.

This story is exceedingly simple and yet it became a favorite of many people throughout the years, particularly those in the Pacific Northwest since a very iconic moment or two was filmed in the city of Astoria, Oregon. Believe it or not, along with the Goonies and Kindergarten Cop, people still tend to talk about this movie and will even point to locations they believe or know that the movie was shot in. The trick about this of course is that a lot of people might be guessing and won’t even come close to the locations, while those that really know would be able to take you there with the utmost confidence.

This was when hacking was somehow simpler and yet bound to become a lot more serious since just hacking in to change your grades was  fine trick, especially if you had the equipment and the knowledge of how to do such a thing. Unfortunately the guy in this movie thought he’d found a list of new games coming out and decided to play a game. When it became evident that he was playing a sophisticated war game with a computer that didn’t know that it was in fact, a GAME, things kind of flew off the rails rather quickly as he almost became responsible for an all-out nuclear war.

Hands down, one of THE best high school movies, EVER. You can sit and argue about this one until you’re blue in the face but fans of the movie will likely shake their head and be just as adamant as a Christian arguing for their religion, since this was one of the best movies ever made about the plight of the average high school kid. The Jock, the Princess, the Brain, the Criminal, and the Basketcase, all students spending a Saturday in detention, all of them with their own laundry list of problems, and all of them needing something, or someone, to somehow make it right, even if for just a day. This is the call of the teenager even today since no matter what you want to say this movie embodies a lot of us and the uncertain journey we had to make through high school as we navigated the treacherous hallways and the myriad of tests and assignments that felt like nothing less than our own odyssey on the way to an uncertain future. Yes, I had to wax poetic, because this movie deserved it.