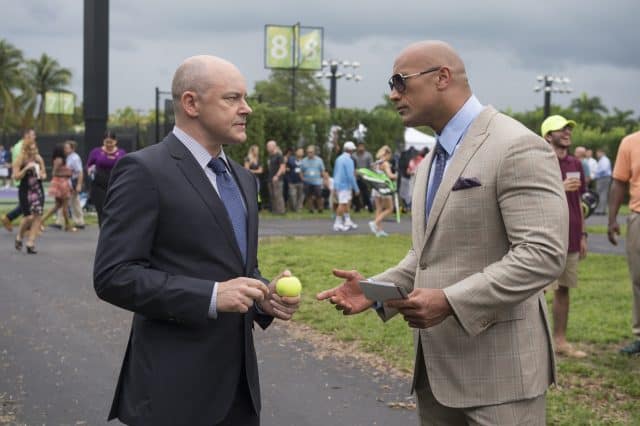 Now in the second episode of Season 2, Ballers is really starting to sizzle (pun intended). The major conflict is rolling on all cylinders, and every character has a major conflict contributing to the drama. It’s both compelling and funny, and that’s Ballers at its very best.

This week on Ballers: Spencer moves aggressively to sign Terrell Suggs, but Joe is worried and attempts to slow the roll. Ricky and Jason work on where his next team could be, but he has trouble choosing. Vernon and Joe work on a salary for Reggie, right before he injures Vernon. Charles’ coach wants to move him to the right side. Tracy encounters a conflict at work.

As you can see, there was plenty of plot that cut through this episode. They wasted no time, after setting everything up in the premiere, to get the ball rolling for the meat of the story. Action was taken, betrayals and revenge were at the forefront, and Joe kept the comedy rolling through all of it. I really like the story that Andy Garcia’s Andre brings to the table. There’s history (and beef) with Spencer, and he’s a rival financial manager. It’s really a perfect story, now that Spencer has established himself in the financial world. It’s intriguing and dramatic, and really plays well.

That is by far the most interesting story, though. Of course, I likely feel that way because it’s been shoved to the forefront. We’ve had barely any screen time with Vernon, Ricky, Charles, and the like. Tracy wasn’t even IN the premiere. So at this point, it feels like “Spencer and Friends”, and we’re just checking in on all the other characters. However, with The Rock’s star power..maybe that’s how it’s supposed to be. It’s a hollowing feeling, though, because Ricky and Charles and the like are actually interesting characters, who are being cast aside for The Rock.

The bright spot of this show remains Rob Corddry. He can take all of these tense situations and diffuse them with one comment. Without him, I would certainly consider this show a drama series. There’s already a TON of drama, but Corddry keeps bringing the belly laughs and making the show what it should be.

All in all it was a solid, funny episode. Hopefully, they will better utilize their assets as the season continues, because several of these great actors feel wasted two episodes in.

Spencer and Joe steal Andre’s client, as the others contemplate career moves on this week’s solid episode of Ballers.