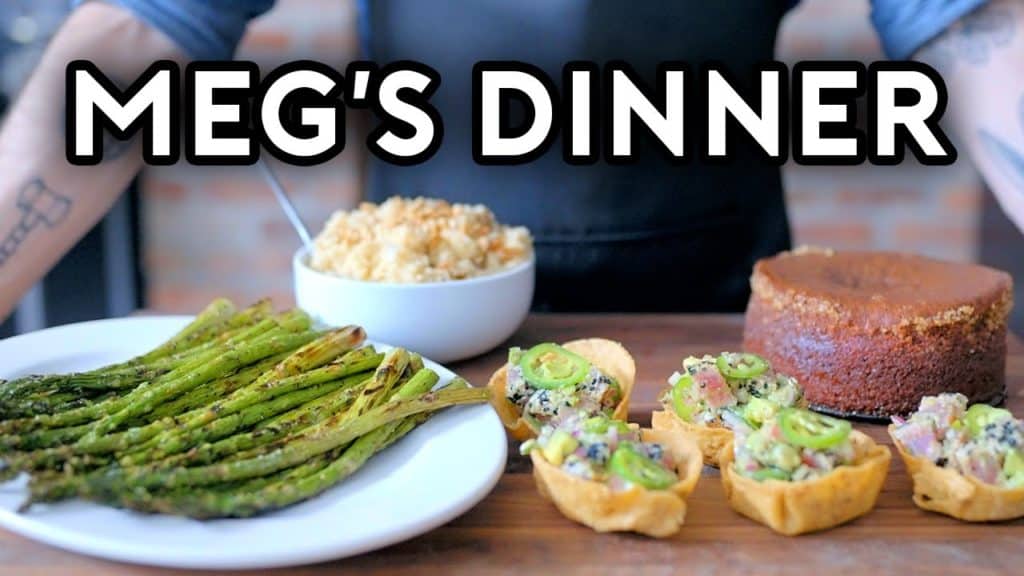 It’s always fun to watch Babish at work and yes, it’s always funny to see what new gags and jokes Family Guy managed to come up with to use against Meg Griffin since when it came to the Griffin family, she was the child that got left out in the cold a lot, sometimes literally. But if one really wanted to be honest, Meg had some good qualities, and lo and behold one of them was as a cook as she showed during one episode, which left the family speechless for a few moments. Even better is that when it was discovered that she cleaned the house in an hour and Chris was doing great at his dad’s job, she had a chance to gloat over the fact that they were doing so much better than their parents. But back to the matter at hand, the fact that Meg could actually cook and, cook an inventive meal no less. Okay, the asparagus is hard to ruin, but all the same, it goes well with the meal no doubt. This is actually a meal that might be worth trying much like many others that Babish has managed to put together.

Nothing about this meal is particularly difficult when one really looks at it since taking everything as it is and realizing how simple it could be is kind of nice since the chocolate lava cake might actually be the toughest part given that baking is, for some folks, kind of tough. There are a lot of different reasons why it might be harder to bake than to cook, and it’s definitely a debate that a lot of people might be willing to get into, but when one follows directions and does this often enough, cooking and baking can become a lot of fun until it’s time to clean up. Oh admit it, cleaning the kitchen isn’t nearly as much fun as cooking the meal.

Deep frying the tostada shells might be kind of a mess as well, and might be kind of daunting to some that try it, as would removing the waster when the process is over. But compared to many other meals this is actually very simple and wouldn’t require too much to really become a nice and refreshing meal for one’s family. The portion size looks a little on the small side, but then again, dinner is a meal that a lot of people tend to think shouldn’t be too heavy since it’s the last meal one eats before going to sleep. Again, there’s likely a debate to be had over this as there is over pretty much anything, but depending on how hungry a person really is the tostadas might need to be doubled up simply because they almost look like a two or three-bite meal. The couscous looks pretty good, but a lot of people might nix the raisins and stick with the rest, or even add something else in so long as it doesn’t overpower the dish. There are so many variations out there when it comes to cooking that trying to think of everything in one video is kind of impossible when one is trying to get the main point across. But some dishes are extremely versatile while others are not, which is one thing that anyone working in the kitchen should realize.

The seared tuna mixture sounds awesome, to be honest, and looks even better. Of course, if you want your tuna cooked all the way through then it might not be the best dish to sample. The prep time for this meal is what takes so long however since the asparagus and couscous aren’t really that bad when it comes to prep time, but the cake and the tuna do take a while, so it’s not something that a person is going to whip up out of nowhere on short notice unless by some miracle they have the dishes already prepped and ready to go. The interesting thing about lava cake though is that it can be kept in the fridge for around 3 to 5 days, while it can last in a freezer for up to 3 months. The texture and the consistency aren’t bound to be the same obviously, since heating it up and putting it back is going to change the composition a bit. But this is actually a rather durable cake when all is said and done.

For all the taunting and hard times that Meg has to deal with on Family Guy, she does manage to get her payback every now and then. This way is definitely far more positive than when she came home from prison and proceeded to dominate everyone around her. It’s easy to agree with the idea that getting back at her family with kindness definitely feels like it would sting a lot more.