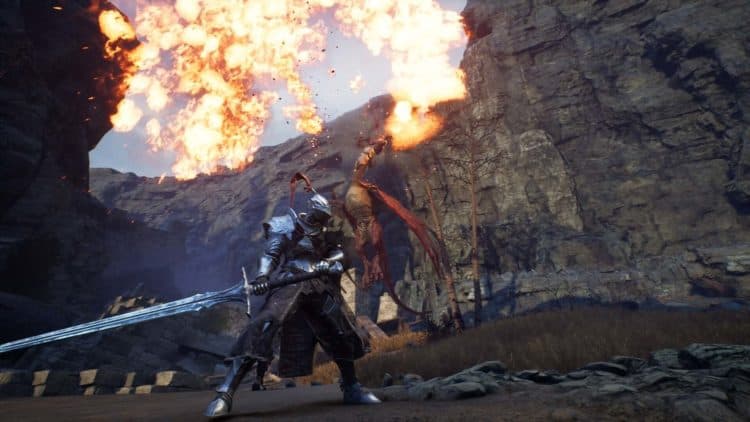 Arise of Awakener is a new action RPG that is currently in development. Even though there is a slew of medieval-themed RPGs in the market today, very few use dragons as a core gameplay feature. Titles that range from Demon’s Souls to Skyrim have these mystical creatures in them, sure. However, very few have arguably managed to capture their magnificence. More fantasy dark age games are using dragons not only for their plot but also as a gameplay mechanic. With current next-gen technology evolving at an increasing pace, bringing these beasts to life is not only plausible but possible. Developer Taner Game is taking advantage of the Unreal Engine to create an immersive and bone-crushing experience. Thus, Arise of Awakener grants a variety of scenarios that come in the guise of melee combat to airborne dogfights.

Fans of the underappreciated Dragon Dogma games will sense it being the inspiration for Arise of Awakener. The story is under wraps right now, but what is known is that players can take control of three distinct characters. From what was shown in the trailer, there will be a knight, archer, and mage available to play upon launch. They act as their own class, of course. Beyond the traditional changes in stats in classic RPG fare, these characters will also have their own move sets. The archer will be able to scale walls while the mage can use magical projectile attacks, for example. Even though this game is early in development, there appears to be a solid foundation laid out to create an epic adventure for the next generation.

Secrets of The Dragon

There are some nuggets of information to glean over with this game. With the gameplay trailer that was recently launched, gamers can get a good sense of what to expect. It appears that this title will be an open-world game. The map will be peppered with various landscapes that range from snow-tipped mountains to gnarled forests. Naturally, there will be all manners of NPCs to interact with. Trolls, shadowy spirits, skeleton warriors, undead knights, and bandits are foes players will need to face. Even though it appears that Arise of Awakener might feature some co-op gameplay, the developers have noted that this is strictly a single-player journey. Of course, it is entirely possible that this could change during development. Nothing is absolute this early in the production cycle. What is interesting about this title is that it prominently features air combat, which is something rare in this particular genre.

Dragons will be a key factor with Arise of Awakener. Based on the footage, players will obviously need to tango with these beasts. However, it is also apparently possible to befriend a dragon and saddle up for riding. Whether this is associated with the story or just a bonus gameplay feature is unknown. What is known about the story is that it is wrapped around redeeming oneself and vengeance. Another surprising mechanic in this title is the fact that players can also go sailing. However, this isn’t the traditional sea-faring pirating motif seen in Assassin’s Creed: Black Flag. No, instead this ship is a magical vessel that glides through the clouds. Players will helm their ship to explore the floating cities alighted in the stratosphere, all while fighting off sky pirates trying to plunder them.

The Craft of Magic

Arise of Awakener is heavily inspired by Europe during the medieval time. The design of this game isn’t shooting for the gritty realism seen in such games as The Witcher or even Dark Souls. Instead, it seems to be more akin to Dragon Age. The combat will be in real-time and seems to be heavily influenced by hack-and-slash IPs like Devil May Cry. There appears to be a sense of weight to the fighting. Players will need to stay on their feet and counter, block, and outwit their opponents. They will be able to summon power-ups, area clearing ultimates, and cool-looking slow-motion attacks. There will be all kinds of projectiles that all classes can use. Things like fireballs, lightning arrows, and mana attacks can all be summoned. There also seems to be some grappling involved with the combat. Players can climb their way onto the top of a troll’s head and sink their blade into its cranium, for instance.

There will also be assorted Nordic-inspired villages that players can visit. Taverns, hotels, and other wares will be accessible at the player’s whim. Most likely, this is where players can trade their loot, upgrade their equipment find new quests to partake in. This is nothing out of the ordinary when it comes to action RPGs. At this point, it has become a tradition. Treasures can be located in towns and most likely this could be where the majority of the story will progress. There will also be a crafting mechanic in Arise of Awakener. Players can explore the wilderness and gather up herbs, spices, and plants to most likely cook up potions. Also, mining will apparently play a factor, as well. Characters will need to brandish a pickaxe to obtain minerals for upgrades. Whether or not this applies to making upper Tier equipment remains to be seen. It is possible that players will be able to upgrade their airship and horse through the use of mining and crafting. This wouldn’t be out of the ordinary, but right now this is just conjecture.

The Awakening Of Something New

Arise of Awakener still has a long way to go with its development. All of its core features have already been exposed to the public and gamers can beginning to take notice. Of course, there is still more to learn about this game and we will have to wait to see what else it has to offer. As of right now, this title seems to be a good alternative for fans of Dragon Dogma. Even if a player is a fan of RPGs in general, Arise of Awakener has some interesting ingredients in its recipe. Arise of Awakener is slated to be released sometime in 2023 for the PC and PlayStation and it is something that medieval fantasy fans should have their eye on.