Home
Movies
Is House Of The Dead The Worst Video Game Movie Ever? 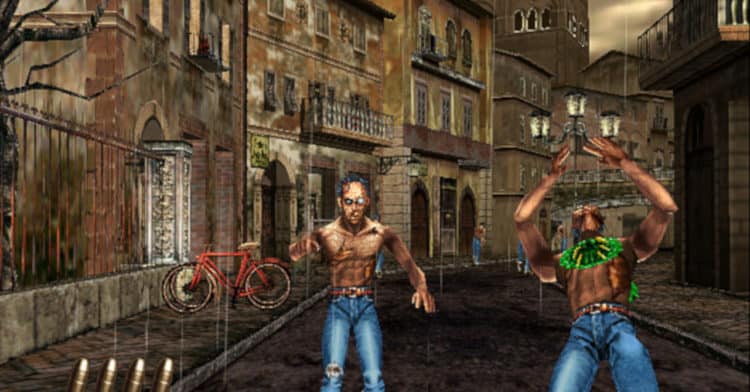 Uwe Boll is no stranger to making bad movies, especially when it comes to video games. The reason that movie adaptations of video games get such a horrendous rep is due to films like Bloodrayne, Far Cry, Alone in the Dark, and House of the Dead, which was all directed by Uwe Boll. Many considered the filmmaker this generation’s Ed Wood. There’s simply no denying the fact that House of the Dead is a god-awful movie that should’ve been left on the cutting room floor. However, is it the worst video game movie ever? Let’s dive deeper into Uwe Boll’s “horror” film. First, I have no issues with filmmakers opting to deviate from the source material. Not everything translates well from video game to movie, so it makes sense that there are going to be some changes. Even then, if a filmmaker decides to go in a completely different route then the important thing is that it’s good and captures the spirit of the original source material. The House of the Dead games were mainly arcade affairs made by Sega in 1996 and it’s really just a mash’em up zombie shooter. There are notable characters in the franchise; however, it is clear that Boll didn’t do his homework on the series. However, that’s not what holds House of the Dead back. The horrendous plotting, the laughable dialogue, and the crappy action are what kills this film.

For example, the plot revolves around this group of friends going to a rave. It’s made clear that nobody wants to take them to the deserted island because of some legend involving death surrounding the place; however, after the gang convinces a fisherman to take them to the deserted island, there’s a huge rave with people dancing and getting drunk without a care. Do I even need to explain how none of this makes any sense? This is a mysterious island that everybody’s too scared to take them to, yet they get there and a huge party is already taking place? How the hell did these people get here in the first place? The film is staged with the most basic and bland lighting. There’s no atmosphere or creepy aesthetic typically found in horror films, nor is there any semblance of style in the 90-minute runtime.

Or, and the characters are bad. When I say bad, I mean atrocious. There’s nothing remotely interesting about these men or women, nor do they come across as likable due to the fact that they’re incompetent at the highest degree. The women are mostly sex objects, who somehow gain these elite Matrix-like fighting skills during the latter portion of the film. I kid you not. There’s a sequence where the film turns into a laughably bad Matrix action scene. Suddenly, these characters that we barely anything about – though it’s clear that they’re not elite fighters or soldiers – have become master guns men who can jump in the air in slow motion. Let’s also talk about the video game transitions that Boll decided to insert. For no apparent reason other than to remind the audience that this is indeed a House of the Dead adaptation, Boll splashes the original arcade footage throughout the film.

It doesn’t make any sense in the overall context as there’s no storyline needed for the animations nor does it provide any sense of style or depth that the movie desperately is searching for. Going to Quentin Tarantino’s Kill Bill, the director inserts a lengthy animation detailing the backstory of O-Ren Ishii; This sequence works because it helps give context to her character and plays into the larger story at hand. Instead of being a fun shoot’em up style zombie film, House of the Dead doesn’t truly understand what it wants to be. Sometimes it’s a terrible action thriller. Other times it’s a terrible horror movie with some groan-inducing comedy mixed in. There’s no tension because zombies just appear out of the blue. There’s no suspense or mystique about the creatures because Boll doesn’t take the time to build up to these moments.  Oh, and the zombies come across as a cheap costume at party city, which ultimately kills the realism of said monsters. Boll tries to pull off a twist, where the main character reveals himself as Curien, who’s the big bad in video games, but it ultimately falls flat because it simply makes no sense. The events leading up to that moment never tie back to his character. It’s possible that the twist was done as a sequel tease. Thankfully, we’ll never know. If you couldn’t tell throughout this article, House of the Dead is a horrendous film. There’s nothing redeeming about it. Is it the worst video adaptation to date? Without a doubt.