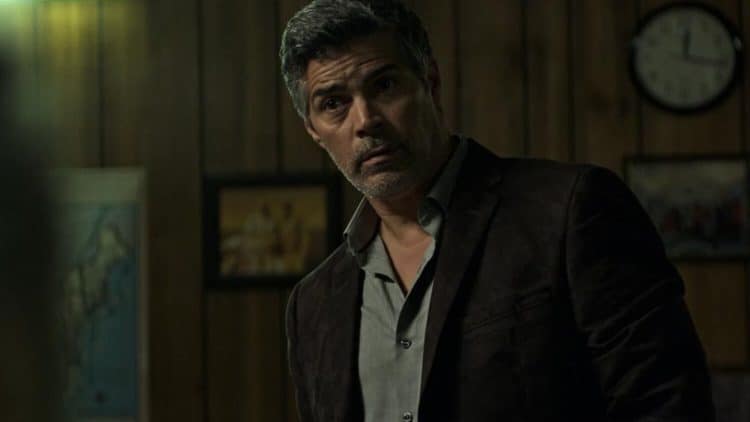 The chances are pretty good that you’ve seen Esai Morales somewhere, even if you can’t remember where, since he’s been fairly prolific in his career at this point and has shown a great deal of range and skill for someone that is likely to be placed in a role that favors those of Latin origin. Unfortunately this is still a very big practice in Hollywood at times but thankfully when it does happen, a lot of times the actors are given such roles because they can fill them from an ethnic and talent standpoint. In other words, they aren’t custom-made for the roles, but they make the roles conform to who they are and what they can do. This is why Esai is great when it comes to playing the part of an intimidating and very tough individual, he simply looks like someone you wouldn’t want to cross unless there was a very good reason to do so. His first movie experience, Bad Boys (NOT Martin Lawrence and Will Smith) was a good indication of just how tough he can be and how convincing of an act he can put on since being locked up in a boys prison and having to prove that you’re tougher than everyone else is a role that might test quite a few people.

Thankfully though he’s done more than just the tough guy role since he’s shown that he has a dramatic and even comedic side as well. Quite a few of his roles have leaned heavily on the dramatic while one in particular stands out a good example of comedy, even if he wasn’t meant to be all that funny in the story. In the Army Now, one of Pauly Shore’s later and less-remembered movies, featured Esai as a Special Forces Sergeant that was meant to be something of a hardass but ended up coming off as a jerk for part of the movie and someone that the audience could actually like for the last part. He didn’t work in a lot of his own comedy in the movie but he did get a few lines that were kind of funny, which is good enough to indicate that he has a pretty good sense of humor. Apart from that however a lot of his work has been wrapped up in the dramatic arts, where he definitely excels and can turn a character into someone that the audience will either love or hate, or love to hate. There’s something great about an actor that can play a diabolical part and make people believe that the character really is irredeemable and without a conscience. Of course if we’re talking about his role in Ozark then it would pay to be specific since a lot of the characters in the story might fall under that category at one point or another.

His part in Ozark, despite only lasting for one season, was the kind of guy that you figure might laugh while he’s watching you burn since he played the role of a cartel member that was seeking to launder money with the Byrde’s. The only problem came when the Snells were introduced and things got a bit of whack, meaning of course that Darlene Snell obliterated the cartel member from the nose up with one shot. That was the end of Elias’s involvement with the show, and it was a sendoff that held dire implications for Marty Byrde and his family moving forward, but up until then it was easy to see that Elias’ character was a guy you just didn’t cross unless you were tougher than he was or had more firepower and crazy on your side. Not every character he’s ever played has been dispatched in such a manner but the fact that he’s played some very rough characters makes it obvious to think that a lot of them have either been roughed up or killed on screen, though it’s also wise to state that he’s not one of those that might hold a record for being killed on screen so many times. That record still belongs to Danny Trejo as far as anyone knows. Esai has been the kind of guy that more or less sticks around for a good part of a movie or a season, if not the whole thing, and plays a role that’s hard to do without until the story moves beyond them.

Given how long he’s been in the business though it’s worth noting that he’s been a truly stand-up kind of guy that has taken on roles that some might not want and has been a steady and reliable presence in show business. Sometimes such types are easier to deal with than those that get too big too quickly and forget what it’s like to have actually work for a bit of recognition.