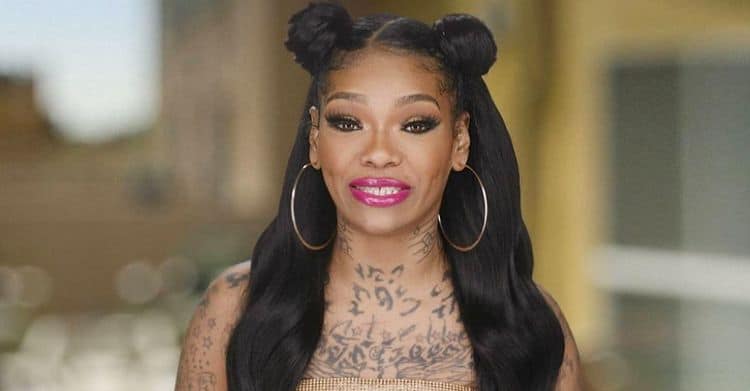 Apple Watts is well-known for her role on the hit television show Love and Hip Hop, but it’s her recent car accident that has made her a constant headline. Her Mercedes was traveling in California when it collided with a pickup truck. Reportedly, the car rolled several times off the highway and then burst into flames. She was taken from California to Nevada to a hospital where she has neither communicated nor woken up since the accident and following her surgeries. Right now, her fans are praying for her and her family, and many are asking who she is.

When she began to work her way into the public image, she chose to do so as a model. She wants to rap and be a musician, but she knew she would need to do what it takes to make that happen as a person who is taking jobs where she can get them. She models, and it’s proved lucrative for her.

When she’s not modeling, she’s working on a career as a rapper. It is, after all, what she’d like to do with her life. She is hopeful she can work through the tough aspects of becoming a rapper by working on herself and her career through collaboration with more well-known musical influences.

3. She Had a Difficult Childhood

She did not have it easy as a child. She grew up in the foster care system in Los Angeles. More accurately, she grew up in the South Central LA area, which is not known for being the most amazing area in which to grow up. She’s had a difficult time with much of this in her own life, and it’s been proven as she’s appeared in many episodes talking about it.

4. She is a Famed Stripper

She rose to fame as a stripper. She was doing it to make ends meet, but she was quite good. She event continued to strip as she was working on her music career. This is a situation that has caused her a lot of trouble with her managers and others in her life who want her to quit this job and work on her music and other parts of her career. She’s not doing it, though.

5. She Did Adult Videos

She is a mother. She has three kids of her own, but we aren’t entirely sure if they all have the same father or if they are from different men. She does mention that they are from previous relationships she was in, so we assume at least two of her kids have different fathers. Her kids are Richard, Kali, Miyaki. They are all last name Watts.

She has never had a great parental relationship, which is obvious based on the fact that she did grow up in the foster system. However, she did experience some things with her own father on the show that were not easy for her, including the fact that her father knew he was not her father, and she did not know until she had a paternity test done. She chose to cut ties all together following that.

At the moment, she is still struggling. Our thoughts and prayers are with her and her children as they suffer through this tragedy together. She has undergone surgeries to repair her broken neck and her other injuries, including her brain injuries. There is still significant issues with her healing, and we simply don’t know what will happen.

9. Recovery Will be Long Term

It’s been a week since her car accident, but not much has changed. Depending on the outcome of her recovery, we can tell you it will likely take a long time for this young mom to recover. Even if she wakes up and begins to heal from her injuries, the recovery process for injuries such as her own will take months or even years.

10. She is Unable to Communicate